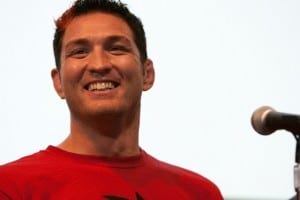 The former UFC middleweight fighter was charged with burglary

Jason ‘Mayhem’ Miller was arrested Monday on suspicion of burglary after police found him sleeping naked on a couch inside an Orange County church.

According to Orange County sheriff’s spokesman Jim Amormino, the pastor of Mission Viejo’s Mission Hills Church alerted authorities to a break-in shortly after 9 a.m. The first floor of the church was trashed with broken pictures and books thrown across the floor and the walls covered in spray-paint. A trail of residue from a fire extinguisher led authorities to the second floor, where Jason ‘Mayhem’ Miller was found, according to Amormino, naked and “dozing” on a couch.

“When they asked him his name, he kept saying, ‘Mayhem, Mayhem,’” Amormino said. “They didn’t know who he was – they thought he was being uncooperative.”

Jason ‘Mayhem’ Miller was arrested without incident and taken to the hospital ward at the Orange County Jail, where he was “deemed OK for booking,” according to Amormino. He was charged with suspicion of burglary but could face vandalism charges as well, added Amormino.

It is not clear how Jason ‘Mayhem’ Miller gained access to the church. Deputies believe Miller entered the building by removing boards that covered a window broken Saturday night. Police believe Saturday’s broken window was another burglary attempt and are investigating whether Miller was responsible for that attempt.

Jason ‘Mayhem’ Miller has been associated with several MMA organizations, including UFC and the San Jose-based Strikeforce. The middleweight fighter said earlier this year that he would retire if C.B. Dollaway defeated him in a UFC match on May 27. Miller was defeated in that fight, prompting UFC president Dana White to say Miller was “done” with the organization.

Miller appeared on Spike TV’s The Ultimate Fighter as a coach. He also hosted three seasons of MTV’s Bully Beatdown.

Miller’s next court appearance is scheduled for Aug. 15.