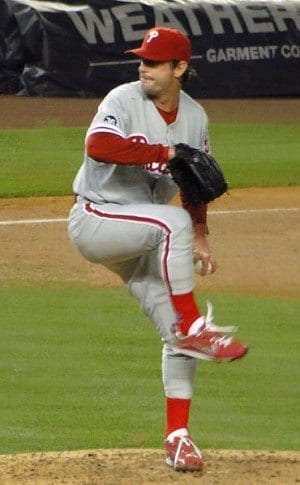 The pitcher said he would be honored. “To have your name mentioned with great players of the past or Hall of Fame players, it’s pretty special,” Jamie Moyer said.

“It’s a great night for the Rockies, as far as winning a baseball game. But it’s an historic night for one tremendous human being,” Rockies manager Jim Tracy said. “It couldn’t happen to a better guy. A more professional person I don’t know I’ve been around.”

The 49-year-old left-handed pitcher used his experience to his advantage against the young Padres, six of whom weren’t even born when Moyer made his major league debut in 1986 with the Chicago Cubs.

Jamie Moyer banked on a consistent cutter and mixing in a 78-mph fastball, giving up just six hits and two runs as he kept the Padres hitters at bay.

The Padre’s Mark Kotsay’s first plate appearance of the season was in the opening inning against Moyer. The 36-year-old Kotsay has a .583 lifetime average against Moyer. They even exchanged friendly grins after each of Kotsay’s two singles.

“He wears me out. He knows it. I know it,” Jamie Moyer said. “We joke in the offseason.”

Kotsay also expressed respect for Moyer. “It says something about how much he loves to compete and his willingness to work, and at 49, to go out and throw the ball and have success,” said Kotsay.

Jamie Moyer became the oldest player in baseball in 2008.