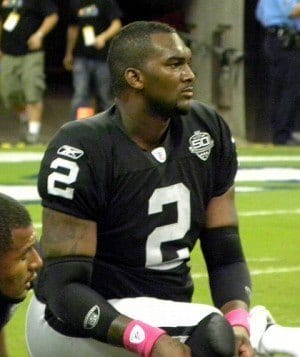 JaMarcus Russell, former Oakland Raiders quarterback, announced that he is attempting a comeback, determined to make people remember him as more than a “bust.”

Russell played with the Raiders from 2007-09, winning seven of 25 starts and completing 52.1 percent of his passes, according to ESPN. The raiders released him after the 2009 season. In July 2010, Russell was charged with felony possession of a controlled substance, a drink containing codeine, but was indicted the same year.

Russell is 6-foot-6 and weighs 308 pounds, according to Yahoo! Sports.

To make amends for his past mistakes, he said he has been spending time with youth groups, speaking about his arrest.

“I’m not looking for a pat on the shoulder from people who haven’t been there for me,” he said to Yahoo! Sports. “It feels funny not to go through a training camp. That’s just what I’m used to. It’s going to feel good to go back out there again. I will make this happen.”

According to ESPN, Russell was paid $39 million for his time with the Raiders.

He also attempted a comeback in Nov. 2010 with the Dolphins, but nothing came of their interest in the quarterback.

Russell told Yahoo! Sports, “People don’t know the real you, but I want people to know the real me and see what I can do. People are always saying that I’m a bust. I want to show them I’m not. I’m committed to this now.”