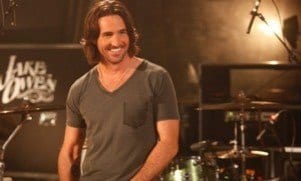 Most known for his party-like anthems “Barefoot Blue Jean Night” and “Beachin’,” Jake Owen is straying from his beachy-vibe anthems of good times and cold beers with his latest single, “What We Ain’t Got.”

The song is a heartfelt ballad that is emotional and shows a side of Owen that we don’t see often in his beach-inspired hits.

The track is accompanied by a heart-tugging video directed by Mason Dixon who strived to push Owen to new boundaries by making the video real-to-life.

“This song is such a special song and an important song in my career. It’s really hard sometimes to create a visual depiction of something that’s so well written as a song, and I’ve never made a video for a serious song before. It was a lot harder to work on than others,” Owen told ETonline.

Dixon helped him do just that— reach beyond his comfort zone in order to create the emotional fitting video that shadows real people facing real issues in real time.

“The people in the video are real characters and once you listen to the lyrics and the video together, you’ll see it’s very real,” explained Owen.

According to Owen, it’s easy to make fun party anthem beach hits but his newest single, “What We Ain’t Got” is different. It’s real life. It’s about real people going through real problems and it’s showing them in those raw moments.

“This relates to people going through a whole lot of things in their life and I was eager to try and be the messenger of this song,” explained Owen.

The track certainly strays away from his traditional beach-inspired songs but it showcases his depth and versatility as an artist as well as his courage to give in and try something new.

Check out the emotional fitting video for Owen’s latest single “What We Ain’t Got” here.