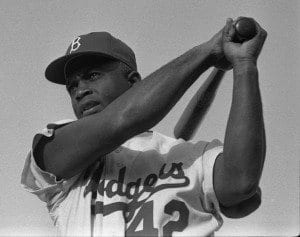 Hollywood has finally found a star to play Jackie Robinson in the upcoming film “42.” Chadwick Boseman, a relatively new face to the silver screen, has been recruited for the dynamic role.

No stranger to iconic sports films breaking the color barrier, Boseman has already played a role as Floyd “the franchise” Little in “The Express,” a movie about the first African American football player to win the Heisman trophy.

This time, Boseman will play Jackie Robinson and depict the history-making story, when Branch Rickey, played by Harrison Ford, signed the first African American baseball player to the Brooklyn Dodgers. Nicole Beharie will also accompany the two actors in “42” to play the role of Jackie Robinson’s life love, Rachel Islum, who later married the baseball legend.

Jackie Robinson died of a heart attack in 1972 but Rachel Robinson has worked in full cooperation alongside writer/director Brian Helgeland to help create the biopic attributed to her late husband.

Jackie Robison heroically handled racism from fans, opponents and even teammates. He succeeded in demolishing racial barriers and influencing the civil rights movement. Martin Luther King grew up watching the baseball star and later commented on him, “a pilgrim that walked in the lonesome byways toward the high road of Freedom. He was a sit-inner before sit-ins, a freedom rider before freedom rides.” All the while Jackie Robinson cemented his name as one of the best players in baseball history. He was a .311 career hitter, was given the Rookie of the Year award 1947 and National League MVP award in 1949 and was elected to the Baseball Hall of Fame in 1962.

Jack Robinson’s number would be retired and eventually become the title to the upcoming film about his life, “42.”