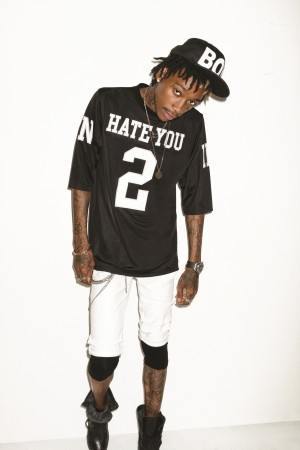 Pittsburgh born rapper Wiz Khalifa has been in the game for a while. He put out his first mixtape in 2006 and has been consistently releasing projects since. Despite being a huge name in hip-hop, Wiz finds himself at an interesting point in his career and life. His last full project prior to his summer mixtape, 28 Grams, came out at the end of 2012. He also started a family with his wife and model Amber Rose and is figuring out life as a father.

The next couple of months are going to be jammed packed for Wiz. He’s headlining the Under the Influence tour with big names such as Young Jeezy, Sage the Gemini, Ty Dolla $ign and Rich Homie Quan. His album titled Blacc Hollywood comes out on August 19th and he recently recorded the theme song for the new Teenage Mutant Ninja Turtles movie.

Despite his busy schedule, Wiz was able to sit down and discuss these topics as well as his grip on Pittsburgh’s rap scene, his own strain of marijuana and what his mindset is like during this busy time.

Carlo Mantuano: I wanted to start off asking you about the Under the Influence Tour and the first show is tonight. How pumped are you?

CM: I also wanted to talk to you about Blacc Hollywood, which is coming August 19th. What can we expect from the album?

WK: Expect a really consistent and big project. Instead of being too conceptual or too difficult to understand, it really just captures some great moments for everybody. And it’s gonna be a really big album for me.

CM: You’ve released a lot of singles for the album including “We Dem Boyz,” “Kk,” “You and Your Friends” and “Stayin’ Out All Night.” Are all those gonna be on the album?

WK: Yeah all of that stuff is on the album.

CM: And I recently saw you came out with the track “Shell Shocked,” which is on the soundtrack for the new Teenage Mutant Ninja Turtles movie. Are you a big fan of the old shows and movies?

WK: Bro…that’s the highlight of my career right there. Anybody who knows me, I wanted to be a Ninja Turtle before I wanted to be a rapper. So yeah, Ninja Turtle first, rap second. So for them to come to me for the theme song, and not only have me, but have my Taylor Gang artists on there and represent the turtles like that, man that is such a huge deal for me and I’m super excited about that.

CM: So you’re saying that if you were hanging out with the Turtles you would smoke them out.

WK: Nah I wouldn’t smoke them out because they’re teenagers.

CM: [Laughs] Good point, so you’d be a positive influence on them then.

CM: Speaking of marijuana, you have a sponsorship on a strain called Khalifa Kush. How did that work?

WK: Well, I know the grower and I had spent some years doing some research just trying to find my favorite weed and just kinda smoke that forever because I’m the type of person that finds one thing and just keeps doing it over and over. So I found the type of weed that I really really love and it was a very rare strain of kush and I was the only one who was into it at the time so the grower just kinda threw me my own plant and branded it as Khalifa Kush. And as weed became more legal, more of a money thing for everybody, for dispensaries and the government and stocks and all that, then it became profitable and legal and in the right way and so I had my own brand of weed for everybody. So that’s where Kk comes from.

CM: Have you been involved in the legalize movement at all?

WK: Yeah for sure. Behind the scenes.

WK: Just as far as like making it more friendly for people and also consulting. I have business partners who, you know, that’s what they really really do and I kinda just follow suit with them just based off of my celebrity and my knowledge and their knowledge. Just put the two together and we’re just mapping this whole thing out.

CM: On that album you had the Trap Wiz sound with the autotune. You did that stuff on your older mixtapes like Star Power and Flight School. What made you want to bring back that kind of sound?

WK: I was listening to those mixtapes. That’s what made me do it! I was really in a place where I was kinda fed up of trying to formulate stuff so I went back and listened to my old stuff and I got re-inspired just by my thought process and my mind frame back then. That’s where Trap Wiz really came from because I really didn’t give a fuck back then. Being in and from Pittsburgh I was talking about some ratchet-ass, Pittsburgh shit. It was in a way that people didn’t really know, you know what I mean? So when I went back and I listened to it, it was like “Yo I just need to get in touch with that dude, bring him out, and let him rap about now.” And that’s where Trap Wiz came from.

CM: Which projects did you go back to specifically?

CM: So, obviously you’re from Pittsburgh. What’s the local rap scene looking like? Who are some people coming out of Pittsburgh that you think could make an impact on the game?

WK: My homie KH. He’s from around our way. He’s really tight. He’s doing videos, got a whole crew and nice sound going. My man Drama. He’s from the Hill [a collection of neighborhoods in downtown Pittsburgh] and he’s really tight. The Come Up, they were super tight. There’s a lot of people doing things in Pittsburgh individually, like making videos and coming up with different sounds and it’s hard to say who’s gonna be next. Oh, Boaz of course. That’s my man. It’s hard to say who’s next because I feel like everybody has so much potential. Oh Hardo, almost forgot about Hardo. He just came home from jail. Everybody has got their own sound and their own individual thing they can do for the game and I think that it’s up to the individuals to make the right decisions because Pittsburgh is such a weird place where people can get caught up in the city and you don’t make it to your full potential other places. You know like fully functioned and see how people love you in other places. That’s the main thing that I’d like to stress and you know get across to Pittsburgh artists. Get to popular places other than Pittsburgh.

CM: How many people have you worked with out there?

CM: Along the same lines, what are your plans for the Taylor Gang label and brand?

WK: Yeah the label and the brand is really strong. It’s like I was telling you, we’re just building everything so it’s not just relied on music. We have Taylor Gang films, we’re starting a skate team, we’re submitting art and stuff like that. Just in a way where people will look at us as game definers. We define what goes on in the culture instead of being game changers. If you look at Under the Influence music tour, Kendrick was on the first one and then he went on to do what he does. Ty Dolla $ign was on the second one and now he’s writing for fucking Kanye and Rihanna and shit like that, which he should anyway, but at the end of the day we have a thing for seeing artists and getting them to their full potential based off our methods and our machine. So we’re gonna start using that way more to our advantage in the open so people will see it and recognize it.

CM: We have to wrap it up, but I definitely wanted to ask you about family life. How’s it going?

WK: Family life is amazing. My boy is getting big. My wife is always there for me holding it down so it’s cool. This is like the busiest time of my life and it’s difficult but I know when I look back on it, I’m gonna be happy that this is how it is. You know it’s cool too that my son is at that age where he’s developing. I can facetime him and he’s saying daddy and stuff like that, but he’s not too emotional or too sad when I leave. You know, he cries like as soon as I leave out the door and stuff like that. When he gets older and older he’ll be able to travel with me and we’ll be able to do a lot of it together. So I’m knocking it all out now.

For the full interview check back for the full 4th quarter print edition in November!