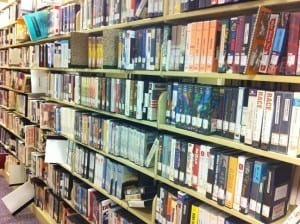 Starting in 1976, Marion Stokes recorded 35 years worth of television news programs, covering topics from the Reagan administration to Hurricane Katrina, that she thought would be important in the future.

Once a co-producer of “Input,” a Sunday morning Philadelphia talk show centering on political and social issues from 1968 to 1972, Stokes took an interest in the news. But it was the 1979 Iranian hostage crisis and launch of CNN, cable’s first 24-hour news network, that prompted her to tape around-the-clock coverage.

Closely following cable news stories on the likes of MSNBC, Fox and CSPAN, she reportedly used six-hour tapes daily and ran up to eight recorders simultaneously. As soon as a cassette became full, it was quickly replaced with another.

After Marion Stokes died in 2012 at age 83, her son Michael Metelits contacted Internet Archive, a San Francisco-based non-profit organization that files just about everything from websites to television shows and makes them viewable and searchable to the public. With the help of volunteers, Stokes’ compilation is now going through this process.

“One of the really important things about the way the Internet Archive is cataloging this is it’s going to enable people who maybe have a narrow view of events to get a sense of the historical sweep,” Metelits told The Daily Dot.

“My hope is that [the archive] deepens public perception of not only how news was made, but the actual politics underlying the news, to help people have a more informed, intelligent engagement with politics. That was my mother’s dream for it.”

For Internet Archive volunteer Trevor von Stein, who kept a relatively large digital music and photo library, he felt a quick connection to Stokes.  “From one kindred spirit to another,” he told Fast Company. “I thought we had to do it justice.”

Fast Company expects the entire digitization process to total about $500,000, with most of the money yet to be raised.

So far, von Stein has already digitized all “Input” episodes, and they are now available for free download on the Archive’s Web site.