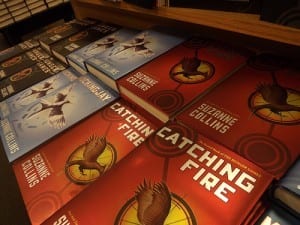 Sam Claflin will portray the tribute from District 4 in the sequel, Catching Fire

Hunger Games fans, beware of spoilers: filmmakers have cast the role of Finnick Odair in the series sequel, Catching Fire. British actor Sam Claflin, 24, will portray the good-looking District 4 darling whose preferred weapon is a trident. Claflin has reportedly been the frontrunner for the role since earlier this summer, and today Lionsgate confirmed the decision.

Suzanne Collins’ second Hunger Games novel centers on the Quarter Quell, the 75th annual Games, for which previous champions return to battle each other to the death. Finnick, the champion from District 4 who won the Hunger Games when he was 14, joins Peeta and Katniss (played by Josh Hutcherson and Jennifer Lawrence) in the arena and becomes an important ally, despite Katniss’ initial suspicions. Finnick is the most significant addition to the Hunger Games sequel, though he is joined by his mentor, Mags (played by Lynn Cohen).

Sam Claflin, though not quite a household name, has been working on his star power of late. He appeared as the romantic lead in Pirates of the Caribbean: On Stranger Tides and played Prince William in Snow White and the Huntsman, with Kristen Stewart. His role in the Hunger Games franchise might just raise his Hollywood clout considerably.