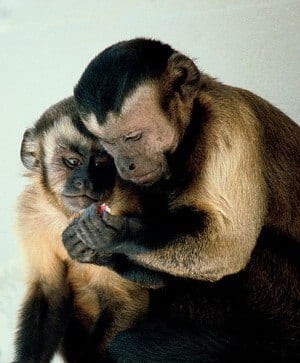 U.K. housewife Marina Chapman says she was raised by capuchin monkeys in Colombia

A British housewife claims she was raised by monkeys after a failed kidnapping left her stranded in the jungles of Colombia. Marina Chapman, who thinks she is in her 50s but can’t be sure, has written a book about her experience being raised by monkeys, which is called The Girl With No Name and is set to be released in Britain in April. It will also reportedly be made into a TV documentary.

The housewife raised by monkeys, which will probably be Marina Chapman’s epithet for the rest of time, reportedly spent five years in the Colombian jungle trapping small animals with her bare hands and becoming part of a family of capuchins “by following them and copying what they ate and drank, their social activities, their language,” according to a press release for the book.

This was Marina Chapman’s life until hunters rescued her. Not quite rescued, actually, because they sold her to a brothel. The price? A parrot.

After escaping from the brothel, the housewife raised by monkeys became a maid for a Colombian family and acquired the name Marina Luz. She met her husband, John Chapman, when she accompanied the family on a trip to Bradford, West Yorkshire, and they were married a few months later. Her children report that they sometimes had to make noises for their food and grew up listening to bedtime stories about their mother’s time living in the jungle. “We didn’t think it odd – it was just Mum telling her life. So in a way it was nothing special having a mother like that,” said James Chapman, son of Marina Chapman.

Some primate experts are critical of the story of the housewife raised by monkeys, according to news.com.au, mostly because of the size difference between humans and the comparatively small capuchin monkeys (for reference, the monkey in the Pirates of the Caribbean films is a capuchin). “I could imagine a young child learning certain skills from capuchins, especially from those primates which have grown up in areas populated by humans, but it stretches the imagination to think of a child becoming a part of a capuchin family,” one expert told the Australian news source.

Marina Chapman reportedly wrote her book to highlight human trafficking and child kidnapping, and part of the proceeds of the book will go to charities in Colombia fighting these problems.