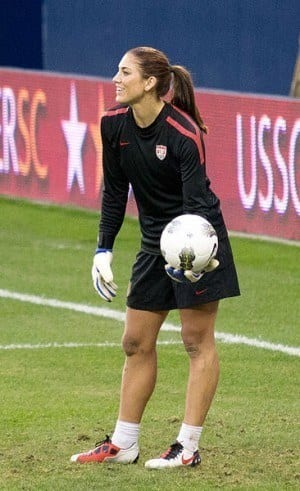 The US goalkeeper will still be playing in the Olympic games

Hope Solo tested positive for a banned substance in a urine test due to taking a prescribed medication called Canrenone from her personal physician for pre-menstrual purposes. Unfortunately, she did not know that Canrenone contained a diuretic and that the drug is classified as a specified substance that can result in a reduced sanction in an athlete’s sample.

Although Hope Solo merely received a public warning from the U.S. Anti-Doping Agency and will be permitted to take part in the Olympic tournament for the United States, the entire process and publicity over the intimate matter has been embarrassing for her. It is extremely unfortunate for Hope Solo that right before one of her biggest experiences in her soccer career, she has to deal with this sort of attention.

The U.S. Anti-Doping Agency was doing their job in finding the diuretic in Solo’s urine test; however, after the warning with Hope Solo, people have been accusing them of testing athletes too closely. Although the drug that was found in Solo’s urine has a diuretic, the medication did not contain anything that could enhance her performance in any way. Hopefully the reputation of Hope Solo will not be hurt in any way from this incident, and the U.S. goalie will be able to set this distraction aside to play to her full potential in the Olympic games.

“As someone who believes in clean sport, I am glad to have worked with USADA to resolve this matter and I look forward to representing my country at the 2012 Olympic Games in London,” Hope Solo said.