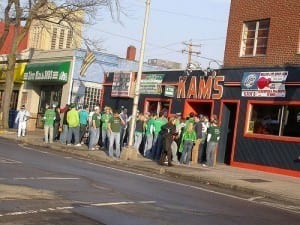 St. Patrick’s Day is around the corner and Paddy-themed festivities are already in full swing. From green beer to debauchery and everything in between, College News has the line up of the five craziest parties that catapult this Irish holiday to campus holiday infamy. All of these notorious parties have a lot in common. Students from all over the country flock to these campuses on the day of their respective Paddy’s parties and they all have sort of let’s say a reputation for escalating quickly and sometimes some things getting broken, like automobiles. Without further ado, the St. Patrick’s Day parties you must experience at least once in your lifetime…

Unofficial at University of Illinois is typically the weekend before St. Patrick’s Day, this year it was held on March 7, 2014.The partying takes place on campus and spills over to the bountiful bars of Champaign, Illinois. Story has it that the first Unofficial began in March of 1996, when the official St. Paddy’s day was to fall during U of I’s spring break. Well, this simply would not do. Thus, Unofficial St. Patrick’s Day at U of I was born and it has been attracting hoards of students all donning their personally designed festive shirts to come join in on the marathon of shenanigans ever since.

University of Dayton on St. Patrick’s Day. Rumor has it; David Letterman once said the best St. Patrick’s Day parties take place in the cities of Dublin, Ireland; Chicago, Illinois; New York, New York…and Dayton, Ohio (thanks to University of Dayton). Whether Mr. Letterman actually uttered these words or not, I am here to tell you he should have.  Every year on March 17 and the weekend of, thousands of green-clad people flock to “the Ghetto” (the endearing term students use to refer to the rows of university-owned houses) where nearly every house hosts a party. Midwestern hospitality overflows like a red solo cup filled with Natty Light, and college hosts welcome perfect strangers into their homes united under the common motivations of having a good time and partying hard. Last year the party may have gotten a little rowdy causing the Dayton police to respond with riot shields to break up the party early.

More info on U of Dayton St. Patrick’s Day Party

State Patty’s Day at Penn State. The award for most improved goes to Penn State! A reported 75% less arrests were made this year (March 1, 2014) as opposed to 2011. State Patty’s Day began one fine spring in 2007, when as we have heard before March 17, was going to fall during the university’s spring break. In an effort to prevent the partying from overlapping, students organized the very first State Patty’s Day so that it was separate from spring break. Many restrictions have forcibly toned down State Patty’s Day, including the $5,000 payout issued to every bar nearby if they agreed to ban the sale of alcohol for State Patty’s Day.

St. Patrick’s Day, West Virginia University. According to Playboy magazine, (if you do in fact read the articles) West Virginia University is the number one party school in America of 2013. In the article, it specifically mentions WVU’s St. Patrick’s Day party as one of the reasons for snagging the top spot. And the Oscar goes to…”I’m Shmacked” (http://youtu.be/tP0Xod-L1Yw) watchers be warned! As a general courtesy and sheer curiosity, I would like to reach out to everyone in that video to make sure they are okay.

UMass Blarney Blowout. Apparently, the University of Massachusetts had a big Irish-themed party this year. If the news headlines did not reach you, UMass is good at partying…maybe too good. Unfortunately, the party did not end too well for almost 80 partygoers as the police arrested 73 people at this year’s Blarney Blowout in Amherst. If you missed it, good job avoiding arrest, however, this year was so out of control that there may not be a Blarney Blowout next year.

Previous ArticleThe Heisenberg Uncertainty Principal: Clearing Up Some of the UncertaintyNext ArticlePi Day: a mathematical celebration