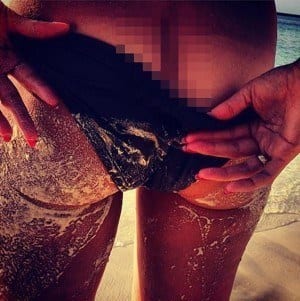 This is the news today everybody. Have a nice weekend.

Heidi Klum is just like you and me. She is a fashion designer and successful TV Host with a net worth around $70 million. She has landed covers of Sports Illustrated, Vogue and Elle. And just like you and I, Heidi Klum has her mother take photos of her butt crack.

Heidi Klum, the 40-year-old mother and model whose breasts must constantly be in dire need of air, has been posting many photos on her Twitter feed in the past month. Many of these photos were swimsuit model-styled pictures of Heidi Klum baring beach bum to her mum.

Yes, Heidi Klum’s mother is taking semi-nude pictures of her daughter for your viewing pleasure. In an interview with Access Hollywood, Heidi Klum discussed her comfort with her body (good for her, I know it must be hard on her) as well her relaxed-nature with nudity.

“You will be surprised when you hear that my mom takes most of the photos,” she told Access Hollywood. “Yeah, my mom and dad. They were on holiday. Yes, so my mom can take some good photos.”

Access Hollywood did not however report on what the name of Heidi Klum’s mother and photographer was, because she’s not Heidi Klum so what does it matter, right?

In regards to the sun’s harmful rays and the frequent topless nature of the Instagram Twictures, Klum said:

This last bit of news must’ve shocked Access Hollywood reporters like Billy Bush, who probably might’ve thought something along the lines of “European? I thought she was German?”

Since Klum is such a trend setter I have no doubt that mothers across the country will start to instagramming and tweeting photos of their 40-year-old daughters.