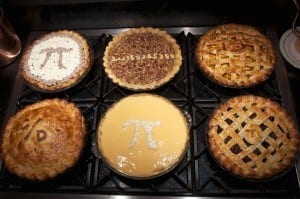 Once a century, Pi Day gets super nerdy!

Pi Day is one of those lovely, silly days that can appeal to both nerds and non-nerds alike. While Pi has been around for eons (4,000 years, give or take), Pi Day has only been a nationally recognized day in the US since 2009. For the nerds, it is a numerical phenomenon, for the non-nerds it’s an excuse to stuff your face with obscene quantities of pie. Pizza pies, apple pies, moon pies…you get the idea.

If you’ve never celebrated Pi Day before, Pi Day 2015 is the perfect time to start! Once every hundred years, this day gets an extra dose of nerdiness. For those of you who have avoided math like the plague for most of your life, let’s have a quick lesson in Pi. Pi, or π for you Greeks out there, is a mathematical constant and the ratio of a circle’s circumference to its diameter. Pi is often shortened to 3.14, although it’s actually infinite. In the ’15 of each century, pi day gets two exact seconds (one am, one pm) as opposed to a general 24 hour window. On March 14th, 2015 at 9:26:53, this mathematical phenomenon gets a bigger slice of Pi day, representing 3.141592653.

To make the stress of college admissions time a little less intense and a little more fun, MIT (Massachusetts Institute of Technology for the non-nerds) sends out its acceptance announcements on March 14th every year, and this year will send them out at 9:26am on March 14, 2015.

Another fun piece of nerd trivia – Albert Einstein’s birthday is Pi Day, he was born March 14, 1879. Princeton holds a Pi Day/Albert Einstein’s Birthday celebration each year, a fitting location as Einstein spent a lot of time at the university and even passed away in Princeton, NJ in 1955 (not on March 14, that would be weird).

What are your Pi Day plans? Tell us in the comments below!

Learn more about Pi and Pi Day at http://www.piday.org/

Here’s a few of our favorites:

Feel like taking your Pi Day Pie to the next level? Check out this Pi Pie Pan on Amazon http://astore.amazon.com/pidayorg-20/detail/B00GTB1X8C

To see Pi in a portion of its infinite glory, check out http://www.geom.uiuc.edu/~huberty/math5337/groupe/digits.html