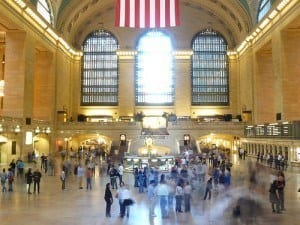 Grand Central Station, New York’s landmark train terminal also known as Grand Central Terminal, turns 100 years old today. The terminal has serviced millions of commuters over the years and has become a tourist destination because of its architecture and depictions in pop culture.

Grand Central Station’s centennial will be celebrated with a public rededication ceremony, performances and the opening of the exhibit “Grand by Design.”

The architecture of the terminal was designed to accommodate people, with waist-level and elbow-level structures. The building’s domed ceilings allow for conversations to be carried across rooms. Oftentimes, exhibits were shown at Grand Central Station because of the volume of people that visited the train terminal each day.

The terminal was almost destroyed in the late 1960s because of the growth of highways and air travel and the increase of members of the homeless population staying inside the building. However, it was saved by the New York City Landmarks Preservation Commission.

Grand Central Station now has many shops and restaurants inside of it, but it is remembered for its historical presence in New York City and as a staple of transportation for the nation.