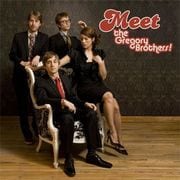 With an Academy Awards appearance and successful YouTube tour under their belts, the Gregory Brothers have a lot to celebrate. The Brothers released an EP, aptly titled “Meet the Gregory Brothers” in 2009, which was well received by fans and critics alike. It was also at this time that they began their Auto-Tune the News YouTube channel, featuring hilarious and catchy, auto-tuned versions of news and current events. Now, three years after their first ATTN video, Andrew, Michael, Evan and Sarah Gregory (Evan and Sarah are married) have racked up over 300 million views. In fact, one of their most recent and most popular Songify This tunes, “Winning” by Charlie Sheen, has garnered over 27 million views on its own!

So, what’s the next step in world domination for the Brothers? I caught up with them following their stint with the YouTube powered DigiTour to find out.

College News: So, I heard that you’ve been touring lately with other YouTube sensations and making appearances at colleges. How has the turn out been for your appearances?

Evan Gregory: This spring we participated in the first DigiTour, appearing with other musical acts that gained popularity on YouTube. We’ve also been making our own separate appearances at colleges, both for musical performances and for lectures about our unique history. The turnout has been steadily growing over the past year, as our music has reached more and more fans.

CN: What prompted you to make college appearances? Do you find that college students make up a large part of your fanbase?

Andrew Gregory: We knew that college students did make up a large part of our fanbase, and also the environment at a college for giving talks was right for us.

CN: What colleges have you appeared at?

EG: Unquestionably, the vast majority of our fans found us online through our videos.

CN: What inspired you to create the first Auto-Tune the News video in the first place?

Michael Gregory: It came to our attention that TV news was boring. And that was directly correlated with the lack of singing and basslines in the news. We thought that was a problem that we could address.

CN: How long does it take to create an Auto-Tune the News video?

CN: I read that Antoine Dodson – featured in the best-selling and hugely popular “Bed Intruder Song” – joined you onstage for an appearance. Have you had other individuals get upset or angry by being featured in a video? Or have they all had a positive reaction thus far?

EG: Our videos have been well-received to date by the unintentional singers they feature, at least as far as we know, with limited ability to get in touch with them.

CN: With Auto-Tune the News and Songify This, you’re able to comment on and parody events and people that happen to be in the news. This is something that shows like “The Daily Show,” “South Park,” “The Soup,” “SNL” and “Mystery Science Theater 3000” all excel or excelled at as well. Are you fans of those shows? Do you think any of them have influenced your Auto-Tune the News efforts?

EG: We are indeed fans of those shows. Although we don’t count them as direct influences or try to imitate them for specific aspects of our work, surely we are wielding some unconscious influences, both musically and comedically.

CN: One of your latest efforts includes your Songify This version of Charlie Sheen’s “Winning.” Do you have any thoughts on the whole Sheen situation?

CN: One of your Auto-Tune the News episodes featured Weezer. What was it like working with them?

AG: Weezer was an early favorite band for all of us, so we really were meeting our heroes. I have to say, it was flattering to find out they were fans.

CN: As our readers may or may not know, the music you’ve released as “The Gregory Brothers” is actually very different from your ATTN and ST projects. Your “Meet the Gregory Brothers!” EP is a fantastic album showcasing a mix of blue-eyed soul and folk tunes. What bands and artists would you cite as your musical influences?

AG: That record showcases what we were doing when we first toured together in 2007. It came together from some folk songwriting and soul influences on the arrangements. We always thought of it as John Prine or Tom Waits meets Otis Redding.

CN: That in mind, are there any artists/bands that you would love to share the stage with?

Sarah Gregory: I would love to share a bill with the classic soul artists from Daptone Records. Separately, T-Pain.

CN: Have you had to change the look and feel of your live shows to incorporate the Auto-Tune the News and Songify This elements?

EG: On The DigiTour, we were doing a video-based performance, meaning we played the songs from our videos with a live band, and it worked really well, with us playing the music synchronized with the video playing on a screen next to us, while we’re singing all our parts in duet with the unintentional singers. The fans have been loving it.

CN: Obviously, you’ve all got great senses of humor, do you have favorite comedians?

CN: Are there any plans for a new Gregory Brothers album release in the near future?

EG: No plans right now for a full-length album, but lots of plans for releasing singles.

CN: I read that Andrew is working on a new album. When do you think it will be released?

AG: I just successfully funded the release of the album with a Kickstarter project. Hooray! So that means my solo record might be out as soon as September. Count on it sometime this fall.

CN: Are there any other projects (solo or together) that you’d like the readers to know about?

EG: Sarah has an amazing soul band that she fronts called The Stanleys. You can find videos of them online but there’s no full-length studio recording yet.

CN: If our readers are interested in getting The Gregory Brothers to perform at their campus, what can they do to make that happen?

EG: We are repped by 3 Arts Entertainment (management) and William Morris Endeavor (agents). Their contact info is on our website, thegregorybrothers.com.

CN: Finally, if there was a word or phrase that each of you could become associated with (like Charlie Sheen and “winning” or “Tiger blood”) what would it be and why?

MG: Believe in your dreams. You can achieve anything except those things which are impossible for you to achieve.

SG: You shall build a turtle fence.