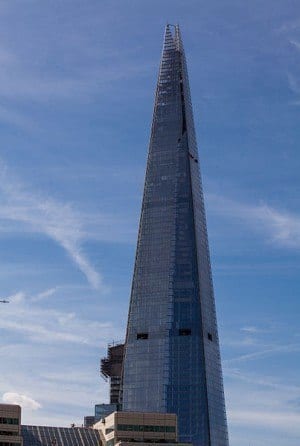 Greenpeace activists were climbing a London skyscraper on Thursday morning in order to protest Shell’s plans for expanded Arctic oil drilling in Alaska and Russia. The six female activists’ chosen skyscraper, the 72-story, 1,017-foot Shard building, towers over the three London offices of oil giant Dutch Royal Shell. Being Western Europe’s tallest building, the activists hoped to put artwork at the top of the Shard for the company to see.

“They don’t want us talking about their plan to drill in the Arctic. We’re here to shout about it from the rooftops,” Greenpeace said in a statement.

The activists are from Britain, Canada, Sweden, Poland, the Netherlands, and Belgium. After evading security guards just before dawn to start the unauthorized adventure, the “#iceclimb” stunt was live-streamed by the activist climbers via helmet-mounted cameras. They paused a few times to post pictures on Twitter.

The spectacle was entertaining off-line too, as many morning commuters during London’s rush hour stopped to watch or take their own pictures.

“For me this is a personal act of bravery, and I hope that it can encourage anyone hesitating about taking action—no matter what scale—to take that step today,” said activist Victoria Henry, a Canadian woman living in London, in a blog post.

“It’s going to be really hard work, it’s going to be nerve-shredding for all of us and we may not succeed, but we’re going to do everything we can to pull it off,” Henry added.

A spokesman for London’s Metropolitan Police said, “We were called at twenty past four this morning. We have six protesters attempting to scale the outside of the Shard. We have officers down there, monitoring the situation. The event is still ongoing.”

A spokesman for the Shard said they were working to ensure the safety of the climbers as well as that of the center’s workers and visitors.

In a statement, Shell responded to this protest: “The Arctic region currently produces about 10 percent of the world’s oil and 25 percent of its gas. We respect the right of individuals and organizations to engage in a free and frank exchange of views about our operations. Recognizing the right of individuals to express their point of view, we only ask that they do so with their safety and the safety of others, including Shell personnel and customers, in mind.”

Shell has been engaged in oil extraction in Alaska since the 1950s and in 2012 said it had completed top-hole drilling for two wells in the Arctic, the first of the region’s drilling in more than a decade. But in February, following problems with two rigs in Alaska, Shell put its plans for drilling there on hold.