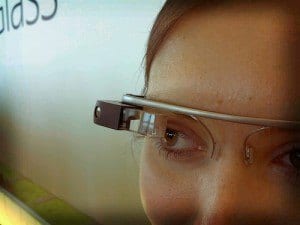 Google, the Internet giant, has decided to crack down on the available uses of its newest item, Google Glass.  The glasses, which have only been distributed through Google’s early adopter’s program, allow wearers to see life through a digital lens. Google Glass, which retails at $1500, is a wearable computer with smart phone capabilities and a camera all built into the lens and the right arm. Many of the functions can be voice activated.

However, Google should have been prepared for what happened this morning. That’s right, a porn app. MiKandi, an adult content web developer, debuted “T*** and Glass” which allowed viewers to browse and vote on explicit content, as well as uploading their own racy media filmed with Google Glass. “We always try to be up to date on the latest technology. We are a mobile-first company,” Jesse Adams, the CEO and co-founder of MiKandi told reporters. “You are literally recording what you see and sharing it. If someone else can see a little taste of what you saw in front of their eyes, that kind of interaction is really fun. It’s that live personalized experience that you can then see on your eyes that’s really interesting.”

Interesting though it may be, Google was having none of it and immediately updated its developer policy, which now states, “We don’t allow Glassware content that contains nudity, graphic sex acts or sexually explicit material.”

This change may quell the fears that many had over rights being violated as Google Glass owners would be able to film them without their knowledge or consent. While people could still film complete strangers, for now it is safe to say that no one would be appearing on any nefarious sites once Google Glass officially launches its app store.

As for Mikandi, the developers and employees are disappointed. They hope Google will loosen up on its policy and for now, the company is changing its plans. “We are going to have to be really creative. There are tasteful and artful things we can do. We still really want to play around the idea of having Glass users share the content, but we need to figure out ways for users to share photos, whether they are just sexy or clothed.”