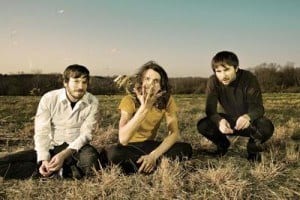 On Wednesday October 3, indie-folk trio, Good Old War, graced the stage of the Riviera Theatre in Chicago, IL. Opening up for Dispatch, and Needtobreathe later this month, Good Old War is certainly making a name for themselves. This band, made up of Keith Goodwin on vocals/guitar/keyboard, Tim Arnold on vocals/drums/accordion and Dan Schwartz on vocals/guitar gave the audience a memorable performance with their acoustic-driven style. Together, their last names make up the name of the band: GOODwin, ArnOLD and SchWARtz.

They didn’t disappoint in Chi-town, playing fan favorites including Calling Me Names and Better Weather from their latest and most popular album Come Back As Rain. From beginning to end, they kept the audience on their feet with upbeat and organic sounds. For just being a three-man band, Good Old War had a surprisingly large array of instruments onstage and were able to produce a rich, full sound. Claiming folk as their main genre, they were able to have a raw, underlying folk sound while also exploding into rock every now and then. Dan Schwartz says it is important to get down to the basics.

“For us, one of the most important things about the band is we can walk into any room and perform all our songs with only our voices and guitars,” he says.

The band also simultaneously brings cheer and depth to the stage. The sound, while mostly happy and upbeat, at times contrasts lyrics about the weight of life. However, the three performers’ strong harmonization brought a balance between the cheerful environment and the serious content, creating an overall hollowed beauty. Needless to say, I bought the CD and it’s been playing on repeat.

What to look forward to in the future from Good Old War: Upcoming shows include opening for Needtobreathe and Xavier Rudd. Hopefully some more late-night talk show gigs and another awesome album are in the mix as well. For more info on these up-and-comers, check out their website at goodoldwar.com and their Facebook page.