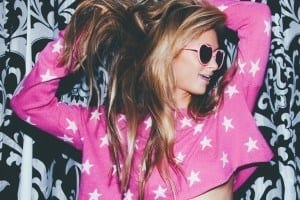 Paris Hilton Discusses Her Reality Show Career, Her Pomeranians, and Her Childhood Fear of Clowns

The Simple Life, which premiered in 2003, launched Paris Hilton into mainstream fame as one of the first stars of the reality TV show era. Over the next few years, Paris starred in five seasons of The Simple Life as well as movies and shows. Since then, Paris has been busy working on multiple projects, from her memoir, Confessions of an Heiress, to managing her retail stores around the world.

The past three years have been even more exciting for Paris. She has been focusing on her DJ career, her new record deal with Cash Money records, and her entrepreneurial projects which consist of her clothing lines, her stores, and her new perfume called With Love. She saw her hard work pay off last November when she earned the “Best Female DJ” award at the NRJ awards.

Paris currently has several new projects lined up in development, including her children’s clothing line and her single, “High Off My Love”. In this interview, she shares her plans for future projects, including her books on giving dating advice to women. Below is an excerpt of the interview where she talks about about her two new pomeranians, reality TV show career, and her childhood fear of clowns. The rest of the interview will be available in the College News Summer 2015 issue!

CN:  I heard about you getting two Pomeranians and that you got one for your mom, like for her 35th anniversary. How did she react? Was she excited, or like, shocked?

PH: She was so happy and so excited. She loves puppies, and she’s been wanting to get one and I found her like, the perfect, littlest, tiniest one.

CN: Yeah, it sounds really exciting. I heard the other one was also to keep Prince company.

PH: Yeah, Prince, I wanted to get him a little girlfriend so that he wouldn’t feel alone because all the other dogs are kind of jealous but they’re too big for him, so I just wanted him to have a little girl who’s smaller than him.

CN: Okay. Yeah, so how’s Prince doing now? I saw the video a while back where he was nibbling on a carrying case. It was adorable.

PH: He’s so cute. I love him so much. He’s doing really well, he’s just the best dog, I’m so obsessed with him.

CN: The Simple Life started the wave of what we now consider the “reality TV age”, so before, there wasn’t really anything like it, and so the concepts were fresh and funny. How was it like? Tell me about it.

PH: It was so much fun, you know, I had no idea what we were getting into. I had never done anything like this before, and never seen anything like it before. We had no idea what to expect. It was all so, like, real, and so crazy, being with my best friend and traveling around the world through like, these crazy little towns and doing all these jobs that we would never get to do in life. So it was a really fun learning experience. We just had so much fun doing it and it was hilarious watching and we had no idea what a huge success it would be, and that it would last for five seasons…

PH: So it was a lot of fun to play those characters in that show.

CN: I recall that you mentioned that the producers asked you to portray yourself in a certain way. So, it’s kind of like your on-screen persona. It’s not necessarily like, the complete you, but it is a facet of you. Can you explain that a little?

PH: Yeah, on the show, the producers told Nicole and I to play these characters for me to be, like, the blond airhead who, you know, never knows what’s going on, and kind of acting stupid all the time, and then Nicole to be the troublemaker who’s always starting trouble, and, um, you know.

CN: The naughty one.

PH: Yeah, being mischievous and naughty. So we would play the characters, and you know, kind of a little bit how I am, this side so they could see I’m fun, and I’m funny.

PH: But, the part of me, yeah, like I’m asking about Walmart, or what’s on, or anything like that, that was me playing into the character, and just kinda for the audience, because I knew that they would enjoy that.

CN: Was it hard to, um, get into your character, or was it like, kind of a natural process? Like, you just had to bring out elements…

PH: It was pretty easy. I’m like a really shy person, so I think being that character was, made it easier for me because I can kinda like, hide behind the character instead of, you know, fully being myself, and being shy, but I think it was fun because just kind of pretending to be someone else, and you could, have more fun with it, and not be as shy.

CN: What were you scared of as a kid?

CN: I saw this really creepy movie about killer clowns from outer space. That one traumatized me.

PH: Yeah. I was always scared of clowns when I was little. I don’t know why. At my grandma’s house there was this one hallway with all these clown paintings…

PH: …and I remember being so scared to walk down the hallway. I was so scared, I don’t know what it was about. [Laughs.]