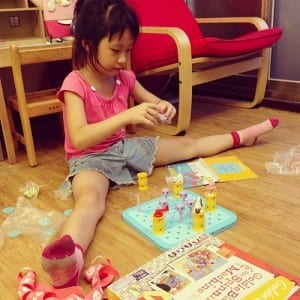 GoldieBlox ad goes viral and inspires girls to be engineers, not princesses

GoldieBlox has literally became the hero to every girl who has received a doll for their birthday and looked at it with a sense of disappointment. From an early age, the media programs girls to like all things glittery, pink and frilly. If you were to look at the playthings aimed at girls, you would think that you just took a time travel trip back to the 1950’s! Fisher-Price kitchen sets, Easy Bake Oven’s and dolls for you to pretend to burp, change and feed are aimed towards girls, pushing them into a box that society makes for them.

Stanford engineer, Debbie Sterling, is working towards a progressive society where more women can become engineers and she is doing this by teaching girls at an early age that they don’t have to be stuck in a box with the release of a new toy company called GoldieBlox. GoldieBlox consists of an interactive book series that comes with a construction set. The story revolves around a fictional young girl with a passion for building named Goldie.

The inspiring ad for the GoldieBlox set is truly amazing and has went viral, gaining over 3 million views YouTube. The video depicts three girls watching TV when they spot a commercial that features another one of those frilly toys that are aimed towards them. This prompts them to create an amazing Rube Goldberg machine that has so many bells and whistles that it turns off the TV set after a series of mechanisms.

“It’s sort of a commercial for a toy, but not really,” Sterling told the LA Times. “It’s more like an anthem–a power anthem for girls.”

In the video, she uses a reworked version of the Beastie Boys’ hit “Girls”, where the lyrics are changed to highlight the gender empowerment that is needed on the toy market. Some of the lyrics are:

You think you know what we want, girls.

and everything else is for boys

and you can always get us dolls

We deserve to see a range.

‘Cause all our toys look just the same

This is really what the world needs right now, and just in time for the holiday season.