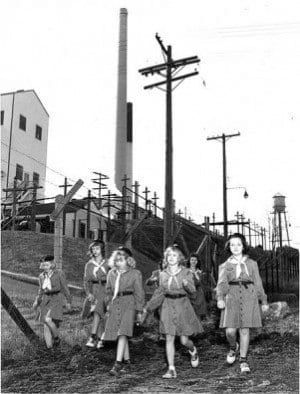 The Girl Scouts turn 100 today, and troops all over the country are celebrating the centennial of a unique group that was started by a woman who saw the potential in all girls.  From founder Juliette Gordon Low to current CEO Anna Maria Chavez, the Girl Scouts have given girls the tools to become confident and courageous members of society who constantly work to make the world a better place.

The Girl Scouts, founded by a deaf, childless and widowed 51-year-old woman in 1912, started with a small group of just 18 girls in Savannah, Georgia.  Low created the Girl Scouts when she saw the vision from a similar organization, the Boy Scouts and knew it was something that girls all over the country could benefit from.  “She adapted Boy Scouting but emphasized vocational and domestic training equally.  She embraced the self-sufficiency that camping and outdoor activities taught,” wrote a WSJ blog.  In a time where women still didn’t have the right to vote, Low saw the potential in the Girl Scouts to better broaden an already limited future that most girls saw.  At the start of WWI, Low “anticipated the usefulness of women to the war effort.  She sent out legions of uniformed girls and women to march in preparedness parades, sell Liberty Bonds, make trench candles and roll bandages,” wrote the WSJ.

The Girl Scouts have carried Juliette Gordon Low’s core values through the last 100 years, including the commitment to diversity.  That first group, created in Savannah, included Catholic, Protestant and Jewish girls; troops that followed included orphans, factory workers, disabled girls as well as girls from the most elite families of Savannah.  Within the first decade, African-American and Latina troops were established, and in the 1940’s, Japanese-American girls were supported by the Girl Scouts while imprisoned in internment camps.  This commitment is still seen today: while the Boy Scouts are rejecting the gay community, the Girl Scouts welcome the LGBTQ community with open arms.

With over fifty million alumnae world-wide, The Girl Scouts have a lot to celebrate today.  Girl Scouts CEO Anna Maria Chavez said, “Our 100th anniversary is our moment in time to bring the nation together to make a difference in the lives of girls. Girls represent an incredible resource for our country, and Girl Scouts has always provided them a platform for success, and during our centennial we want everyone—men and women alike—to join us in making sure that every girls achieves her full leadership potential.”