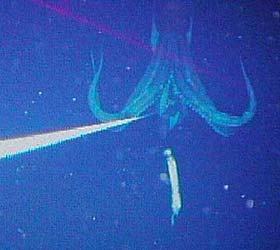 A giant squid carcass has been found off the coast of Australia by a fisherman and writer, proving the existence of this particular, often-dismissed as fictional, marine creature in that part of the world.

The giant squid (Architeuthis) was found dead off the coast of Jervis Bay by fishing expert and author Al McGlashan, during a recent tuna fishing expedition. McGlashan is the author of The Fishing Bible and is a writer with the Daily Telegraph. According to the 702 ABC Radio in Sydney, McGlashan is ecstatic about spotting the brightly colored creature up-close.

According to GrindTV.com, finding the giant squid carcass intact is rare, and finding a giant squid that has not yet lost its bright orange coloration is even rarer.

“In all my time on the water – and I’ve spent 200-plus days out there – I’ve never seen anything like it,” stated McGlashan.

A giant squid is thought to grow to 50 feet. The giant squid carcass found by McGlashan measured approximately 13 feet in length with portions of its long tentacles missing possibly due to an encounter with a known predator of the giant squid, the sperm whale, according to Australian Museum squid specialist Mandy Reid.

It is not known what caused the giant squid to die as the size of the squid prevented McGlashan from pulling it into the boat in order to perform an autopsy.

For decades, the existence of giant squid was believed to be science fiction. The first photographic evidence of the existence of the fabled creature appeared in 2004 when a team of Japanese scientists captured over 500 images of the animal – which measured roughly 25 feet – at a depth of nearly 3,000 feet.

Photographs and video of McGlashan’s giant squid can be found at the Daily Telegraph.