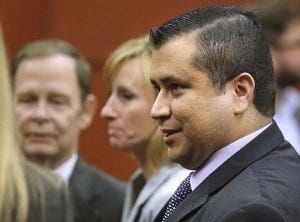 Division among racial and political lines

George Zimmerman’s trial has gathered a divided reaction among the American public split along racial and political lines, and also started a new dialogue about race.

According to a survey by the Pew Research Center, drawn from phone interviews from July 17-21 with 1,480 adults across the nation, 42 percent of respondents are not satisfied with Zimmerman’s not guilty verdict in the shooting death of 17-year-old Trayvon Martin last February. 39 percent said they are satisfied, and 19 had no opinion. But the demographic breakdown is more interesting.

The division with race
52 percent of respondents said race was getting too much attention in the trial’s aftermath, while 36 percent said the case was creating a needed dialogue about race.

Racial breakdown: white Republicans are over twice as white Democrats to be satisfied with Zimmerman’s acquittal (65 vs. 30 percent), and black Democrats are more likely than white Democrats (91 vs. 56 percent) to be unhappy with the verdict.

Gender and age
Younger people are more likely to be unhappy with Zimmerman’s acquittal (53 percent among adults under 30) than those 65 and older (33 percent). Additionally, women are more likely than men to be displeased with the decision (48 percent vs. 36 percent).

Overall, the Majority consists of people who are: not satisfied, people that say race is getting too much attention, black people, Republicans, the Tea Party, white Republicans, young people and women.