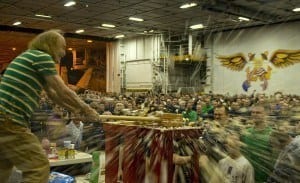 See things he has smashed and video below

Following a report by TMZ Gallagher’s manager Craig Marquardo reported to the HuffPost, “The most frightening development is that the TMZ story is true.”

The 76-year-old Gallagher had come under fire in his more recent years, even notable publications- City Pages, The Stranger, The Smart Set controversial bits considered to be racist and homophobic. The salon printed a Ghallager quote reading, “ disgust for ‘French fags’, lesbians and Obama is now bigger than that oversize couch he used to jump around on.”

This is not the first time the American Comedian American comedian suffered cardiac arrest. Gallagher had a heart attack on stage at a Rochester, Minn show a year ago. He responded to the incident at a show two weeks later to his audience, “I almost died two weeks ago … these are extra days that I’ve been given. I guess God said, ‘Wait a minute, Boca ain’t had their show yet.’ So it’s not me, it’s God’s will we have this show tonight.” He continued, “You can like God all you want to but I’m pissed at him … I had a heart attack while I was doing sledge-o-matic, which is gonna look great in the paper. But now I could die doing something stupid and my story won’t be as cool.”

Oh, and to top it off, the Gallagher heart attack a year ago was captured on tape: