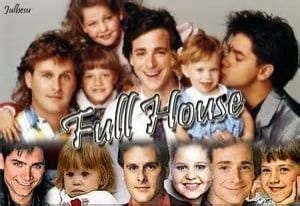 As a “Fuller House”

Watch out all you die-hard fans of Full House, Uncle Jess and the crew are coming back! No longer a rumor, John Stamos announced the news on Jimmy Kimmel Live that Netflix bought the Full house Franchise. “We’ve been working on this  for many, many years,” he said.

Fuller House will hit Netflix next year with Stamos producing the series, and making some guest appearances. He explained that it will begin with a one-hour reunion and then turn into a spin-off series. The show will feature Candace Cameron-Bure as DJ Tanner, who now has three children of her own. Her TV sister Stephanie will be played once again by Jodie Sweetin, and even the annoying neighbor girl, Kimmy Gibler will be played by Andrea Barber. Stamos says that he is hopeful that everyone will return for the new series.

Bob Saget told PEOPLE Magazine, “Five years ago, I said, ‘hey, everybody looks pretty good. I kinda still look okay,’ “We should Hurry.” Stamos and Saget have both talked with one another about the importance of doing a spin-off, and both agreed that is should respect the original series. “It’s such a sweet thing, nobody should mess it up,” said Saget, now 58-years-old.

But Cameron-Bure has even stated that it will have a sort of a present day feel to it, saying, “It’s kind of like the flip of what the original show was about. So it was three men raising these three girls, but now it takes you to the present day and my character D.J. has two boys, one baby on the way, and she’s just lost her husband. And so she needs help so she asks her sister and her best friend to come back and help raise her kids,” she said.

Look out for Fuller House to be on Netflix in 2016.