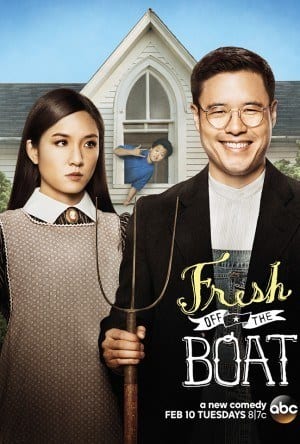 In Fresh Off the Boat Episode 11, “Very Superstitious”, Jessica Huang (Constance Wu), now a licensed real estate agent, sells a house with the address 44 West 44th Street – the number “4” is considered very bad luck in Chinese culture because it sounds like the word “death”. Meanwhile, Eddie (Hudson Yang) runs for school president after being encouraged to by the school counselor, but poor Eddie soon becomes intersected with the bad luck spawned by Jessica’s sale of the bad-luck house.

In episode 11 of Fresh Off the Boat, Jessica breaks away from her usual pragmatism to protect her family from the bad luck that comes from interacting with the number “4”. She goes to great lengths to avoid the unlucky number–even tearing up the check she receives for selling the house on 44th Street, which contains several “4’s”.

Louis (Randall Park) wanted to use her check to buy a bull for his restaurant, so he tapes together the check and cashes it. However, soon the bull’s path and Eddie’s paths intersect, and the “white lie” blows up in their faces.

A cleansing ritual is used in which Grandma Huang (Lucille Soong) enjoys a moment in the spotlight as the mysticist of the family, using Buddhist chants to purify the bad luck. In the process, she also takes some nice collector’s cups from the little brother. That sneaky madam. I was glad that Grandma Huang finally had some more lines (some in English), which shows that she’s a delightfully charming actress and that she just hasn’t had enough lines (besides one or two Mandarin one-liners) to truly shine as a character.

The women in the Huang family are somewhat exoticized in this episode of Fresh off the Boat, as if being more superstitious than the males (primarily Louis). Episode 11 tries to counteract this set-up by revealing Louis as being more superstitious (jade necklace) than he lets on (hilarious), but ultimately it brings in the trope of the magical Asian lady in Grandma Huang. Lucille Soong has played the magical Asian lady before in Freaky Friday as the mysterious lady in the Chinese restaurant. Here, Lucille Soong serves as the old Asian lady with stronger ties to ancient Chinese hocus pocus for Huang family, which isn’t white, but more westernized.

Jessica isn’t an expert to the old magical arts, but she openly buys into Grandma Huang’s set of superstitious beliefs, while Louis is more self-conscious about the beliefs, even embarrassed by it. Once again, Louis serves as the somewhat straight man in this comedy, who (attempts to) distance himself from the antics of his mother and wife. Fresh Off the Boat tries to counteract the gender binary that they’ve set up by showing that Louis is more superstitious than he lets on, and Randall Park is delightful in conveying Louis’s inner neurotic self when not protected from the world’s evil by the jade necklace. I think Louis should take off his jade necklace more often.