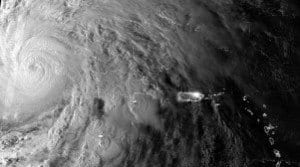 The Halloween hurricane will bring tricks to the east coast

Frankenstorm, the Halloween hurricane causing a fright for those on the east coast of the U.S., is going to hit the states Oct. 29 or 30. The storm has already taken casualties in the Caribbean, leaving a total of 21 people dead.

Frankenstorm is reportedly going to hit somewhere from Virginia to New England. The storm will create pounding rain and strong winds up to 60 mph, according to the Detroit Free Press. Frankenstorm will also create extreme tides off the shores of the U.S., and possibly snow.

In addition to the potential havoc on the U.S., Hurricane Sandy (soon to be Frankenstorm) raged through Cuba on Oct. 25 and killed 11 people in Santiago and Guantanamo provinces.

What will make Hurricane Sandy morph into the monstrous Frankenstorm will be if the hurricane collides with the frigid air coming south from Canada. If the two forces do meet near New York or New Jersey Oct. 30, it could result in a very messy and disastrous Halloween.

Preparing for what could potentially become a billion dollar disaster, New York and New Jersey are taking down decorations, enacting coastal storm plans and letting utility employees know they should expect extended hours to deal with power outages. For Frankenstorm, all emergency measures will be taken to get the citizens through what is expected to be a six-day storm hit for a terrifying holiday.