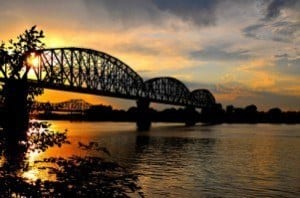 The 11th annual Forecastle Festival lineup is announced– think about it

Forecastle Festival 2013’s line-up has been released, and for those of you raising your eyebrows like, “fore-what?,” you would do well to keep in mind the immediate “sold-out” response or lottery systems instituted by the elite of music festivals and take what you  can get.  Forecastle Festival was curated by Louisville native and My Morning Jacket frontman Jim James in 2013, and his new solo project will feature on this year’s bill.

The 11th annual three-day festival at Louisville’s Waterfront Park runs from July 12-14, the perfect mid-summer weekender for one time partiers or festie-followers alike.  Headliners of this years Forecastle Festival include Grammy Award winners The Black Keys, along with The String Cheese Incident and the Avett Brothers.  This writer is personally juiced for Forecastle Festival bringing together Animal Collective, The Flaming Lips, Old Crow Medicine Show and Big Boi under one roof—a feat that should have everyone scrambling for tickets regardless of name recognition.

Speaking of tickets selling out—what’s with the insane knee-jerk ticket buying going on worldwide?  Coachella’s first weekend sold out in, count ‘em, minutes, and that was with a, ahem, weaker line-up showing than the music giant is accustomed to.  Sasquatch wiped clean within short days after general tickets went on sale, and who knows how many Bonnaroo 2013 tickets abound for the taking.  Forecastle Festival tickets go on sale in April, so honestly, add it to your calendar, buy a ticket and assure yourself of at least one festival this year.

Previous ArticleDennis Rodman has a new franchise: US foreign relationsNext ArticleCarlos Slim wins a little contest by Forbes called “The Richest Man in the Universe”