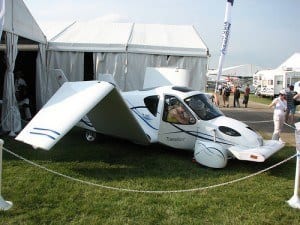 Two models have been announced

Flying cars are no longer a thing of the past. The International Flying Car Association (IFCA) is expecting the announcement of two different flying cars from two different companies.

“Governments around the world have begun changing the rules of the road – and the skies – to make way for these breakthroughs,” said Winfield Keller, the Vice President of IFCA. “While, in truth, flying cars and road-able aircraft have been around for many years, the recent developments of these two major companies have revolutionized the industry and led to the possibility of both companies announcing their vehicles to the public as early as today.”

The first flying car is the PAL-V and has already been considered the lesser of both models. The car looks like a cross between a car, motorcycle, and helicopter. Once the driver has enough room the tail pops out the back and the rotors lift up- and Walla! instant helicopter.

Well actually instant gyrocopter but who knows the difference. The copter can fly as high 4,000 feet and with that avoids many of the regulations of a commercial air craft flying at 35,000 feet.

The other flying car, the Transition, designed by Terrafugia, is expected to be shown off at the New York Auto Show this year. The Transition is much more spacious than the PAL-V but both of the vehicles take regular gasoline from any pump. Over 100 people have already place a down payment of $10,000 on the flying car. That number is expected to increase after the unveiling of the flying car. It is estimated that the cost for this baby will be $279,000.