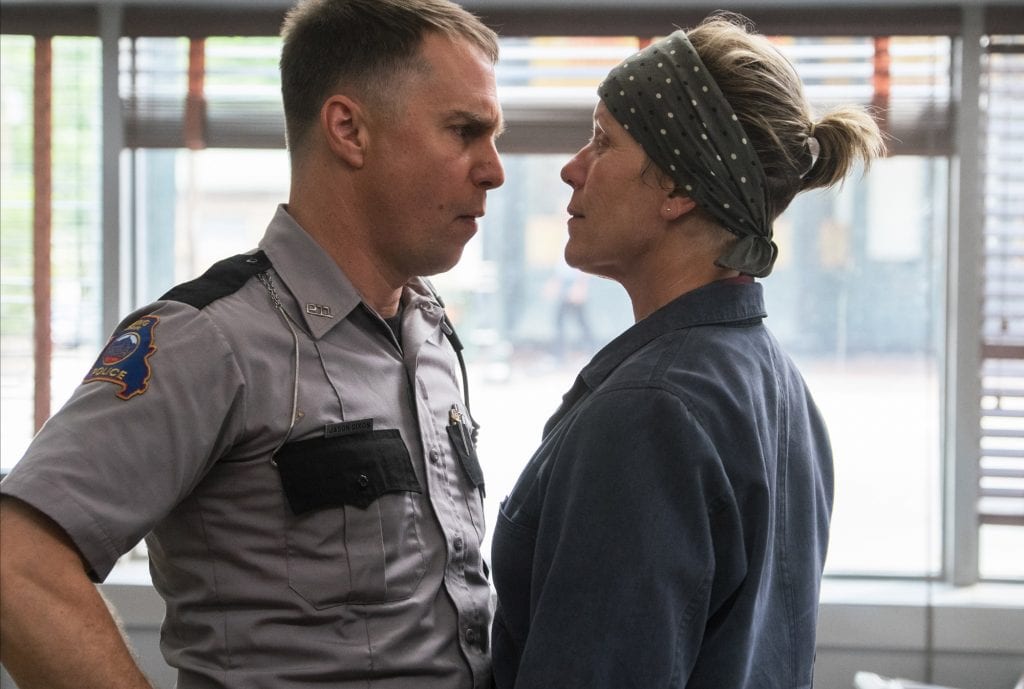 Be warned: Major spoilers ahead!

To review Three Billboards Outside Ebbing, Missouri (2017) is to convey what violent grief truly means. Unless you have the artistic talents of Frances McDormand—the leading actress and protagonist of the movie—this is no easy feat. However, the headstrong messages that echo throughout the narrative scream out and refuse to be ignored—a notion that has evidently been felt by the vast majority of the movie’s attendees.

Three Billboards Outside Ebbing, Missouri was written, produced and directed by Martin McDonagh—the charismatic and somewhat polarizing playwright-turned-filmmaker. McDonagh was raised in south London and his parents were working class Irish immigrants. His writing strongly reflects his diverse upbringing. During his early career, McDonagh dazzled the London stage with his writing, with several of his plays showing simultaneously. But the bright lights of the movie theatre were beckoning and the writer/director went on to create In Bruges (2008), a film generally regarded as a triumph. He more recently directed Seven Psychopaths (2012), which didn’t quite manage to garner the same positive response. Several critics have said that Three Billboards is McDonagh’s best film to date and is McDormand’s most poignant performance since her appearance in Fargo back in 1996.

McDonagh was apparently inspired to write the dark and emotionally raw tale after travelling “somewhere down in the Georgia, Florida, Alabama corner.” The screenwriter/director saw three billboards in passing that referred to an unsolved crime in the local neighborhood. “The rage that put a bunch of billboards like that up was palpable and stayed with me,” McDonagh said. Unable to get the image out of his mind, he pondered on what could have sparked such anguish. “[…] Once I decided, in my head, that it was a mother, everything fell into place,” he remarked.

And so, the opening scenes of Three Billboards Outside Ebbing, Missouri begin. Without a word being spoken, the dank hopelessness of Ebbing, Missouri’s (a fictional place in the southern Unites States) backward community is brought into view. As the not-so-subtle name suggests, this is a town where society seems to be receding. McDormand storms onto the screen as Mildred Hayes: a fiery divorcée and mother whose young daughter was raped and killed seven months prior. As the result of their inaction and incompetence, Hayes wages war on the local police department—armed with a bandana and a tongue so sharp it could cut you to shreds.

As Hayes rides into town, she is accompanied by the soft twang of a western-esque score from Carter Burwell, who incidentally worked with McDonagh previously on In Bruges and Seven Psychopaths. Hayes rents a trio of broken down hoardings on the outskirts of town, brandishing them with a message to the local sheriff, Bill Willoughby (Woody Harrelson). Hayes’ intention is to shame and spur the officers into action and, in doing so, shine a light on the corruption that is rife within the town’s police department. The embodiment of everything that is wrong with the law system is Officer Dixon (Sam Rockwell), a man whose skull-cracking tendencies make him volatile and dangerous. Even in the first moments of our introduction to him, we become aware of his vindictive, racist and homophobic inclinations. We are also made aware that Dixon has recently been involved in a racist assault, although the audience are never fully given the gritty details.

As the tale of Hayes’ struggle unfolds, we come to realise that prejudice is not only engrained within the police, but also within the majority of the townsfolk. Chief Willoughby’s loyal followers remain impassive to his shortcomings, leaving Hayes to defend her cause alone to the very end. It is only the addition of a few unforeseeable events that bring any glimpse of closure for the character.

While there is a darkness that clouds the entire film, it is interlaced with a distinctive thread of satire. In McDonagh’s signature style, he manages to play comedy against violence. At several points—whether it be through Hayes’ prickly sarcasm or Dixon’s bumbling incapability to do the simplest of tasks—the audience are forced to stifle a laugh. Each joke has an unsettling undercurrent, a dark subtext that makes us wonder why we are laughing at all. McDonagh’s knack for making audiences question themselves shines through and is perhaps what makes Three Billboards Outside Ebbing, Missouri such an interesting watch.

One of the most fascinating elements of Three Billboards—whether intentional or not—is that there is no mention of the time in which the story is set. There is no assurance as to whether these circumstances are happening today or, perhaps, a decade ago. While the difference seems insignificant, one could argue that it matters. The narrative gives no real mention of social media, for example, or any other signifier of modern-day culture. And yet, the story could conceivably be set in the here-and-now. Could it be that this was McDonagh’s intention all along? Was this a ploy to have us contemplate the abundance of discrimination that remains in today’s society?

Each of the three main actors give stellar performances, in fact McDonagh admitted that he wrote the characters of Hayes and Dixon with McDormand and Rockwell in mind. However, it is McDormand who steals the show. Her knack for complete naturalism and her depiction of raw emotion makes for an enthralling experience.

While Three Billboards Outside Ebbing, Missouri has largely been applauded for its unique approach, not all reviews have been positive. A number of very important issues are raised in the movie. But, while the matter of race is brought into the story early on, it soon falls to the sideline. Concepts of racism are there but never shown outright. Could this be seen as a copout (pardon the pun)? The same goes for the central character, Dixon. We are indirectly informed of his racist attack on another town member, but by the end of the film we start to feel a tiny shred of sympathy for him. This directional choice is extremely problematic. Humanizing somebody, whose actions cannot be described as anything apart than evil, smells very much like validation. Perhaps, rather than wanting to change our view of this character, we are instead supposed to realise that everybody (even the most vile of people), have a trace of humanity within them.

The movie’s initial release in the Unites States and Canada led to a gross profit of approximately $45.3 million. Since its release in the UK and elsewhere in January 2018, the worldwide total has reached $100.9 million.

McDonagh’s fierce, tragic comedy tugs on the heartstrings; its twists and turns often make us question who and what the real focus of this film really is. Our film review in short: don’t miss it.