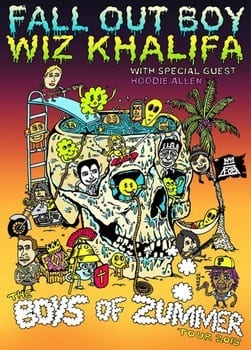 Fall Out Boy and Wiz Khalifia are embarking on a co-headlining tour this summer. The Boys Of Zummer tour kicks off on Jun. 10 in Camden, New Jersey and will criss-cross all summer long before wrapping up at the Hollywood Bowl in Los Angeles, California on Aug. 10.

Rapper Hoodie Allen has been confirmed as special guest for the tour. Allen released his debut album, People Keep Talking this past October which peaked at No. 2 on Billboard 200.

American Beauty/American Psycho is the follow up Fall Out Boys’ 2013 album, Save Rock and Roll. The album is set to release on Jan. 20 but can be streamed now through Vevo in its entirety. The album’s two singles, “Centuries” and “Immortals” have received rave reviews and garnered radio success— proving their power in mainstream music with Top 40 hits.

The tour will hit more than 40 cities this summer. For a full list of dates click here.