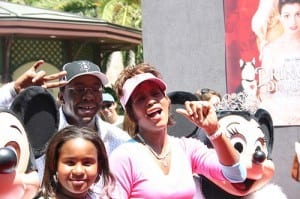 TMZ reported that Bobby Brown, arrested because the singer was pulled over outside Reseda, CA at around 12:30 p.m. for allegedly driving while talking on a cell phone. The 43-year-old Bobby Brown was in custody in Van Nuys jail and was bailed out later that afternoon.

TMZ said police believed he was under the influence of alcohol. Bobby Brown’s arrested titles read, because he was driving with a blood alcohol content of .08 or higher.

Bobby Brown arrested just four days after the Los Angeles County Coroner’s office released the results for the autopsy of Bobby Brown’s ex-wife, Whitney Houston. The Chief Coroner of the case Craig Harvey said Houston had cocaine in her system “in the time period just immediately prior to her collapse in the bathtub at the hotel.” It was determined, the singer Houston, 48, died from an accidental drowning Feb. 11, following a heart episode contributed by cocaine. Brown and Houston met at the 1989 Soul Train Music Awards and married three years later. Their marriage was portrayed in the media with a slew of drug use, domestic allegations and run-ins with the law.

The Bobby Brown arrest would not be the first time the singer went to jail for DUI. In 1998, he pled guilty to the same charge and spent eight days in jail.