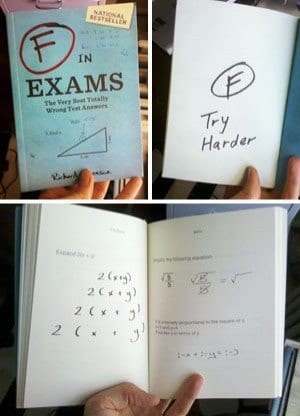 In the recent years there has been a lot of recession-fueled talk of failure as a gateway to success. Richard Benson, in his book, “F in Exams: The Very Best Totally Wrong Test Answers” (Chronicle Books), explores another side of failure—the disarmingly hilarious one.

The book is an anthology of real test answers from students who, when faced with the reality of having to demonstrate their lack of knowledge, decided to go down in style. The book’s whimsical design—including hand-written responses, doodles and original diagrams—adds to the fun and the humor.

A variety of subjects are covered, from chemistry (a student describes the process in which steam turns to water as “conversation” ), to math (in one of the more inventive answers, a desperate test-taker amends a geometry question to read “Construct a banana car” and adds a pitifully pathetic “I want to retake this test” caption next to a cartoon of a delightfully deranged stick figure … driving a banana car!), to history (inhabitants of Moscow are called “Mosquitoes” and an autocracy is a “country with a lot of cars”), to answers verging on the philosophical (Q: “What happens during puberty to a boy?” A: “He says goodbye to his childhood and enters adultery.”).

Whether you’ve ever felt the bitter taste of a big fat F stamped across your academic efforts or not, this book will have you giggling with delight and add a refreshing perspective on the perils of achievement.

You can purchase a copy of “F in Exams” from Chronicle Books.