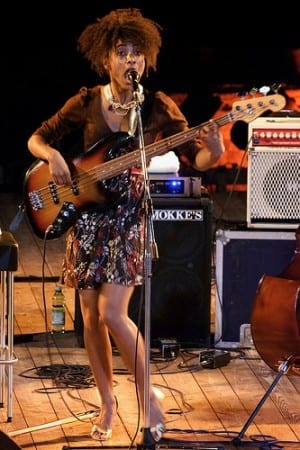 Who is Esperanza Spalding? Believe it or not, she’s the one who beat out Justin Bieber for Best New Artist in the 2011 Grammys. Esperanza Spalding is a jazz singer and bassist and recently appeared on The Daily Show to promote her new album Radio Music Society.

Esperanza Spalding, although a delicate frame, boasts big talent. Jon Stewart told her on his show, “I feel like you should be twice as large as you are with the talent that you have.”

The up-and-coming jazz musician has taken a unique road to get to where she is now. She taught herself how to play the violin at a young age after seeing a guest appearance by Yo Yo Ma on Mister Rogers’ Neighborhood and shortly after joined The Chamber Music Society of Oregon, where she stayed for almost a decade. At the age of 15, she dropped out of high school, received a GED and with the help of a hefty scholarship enrolled in a music program at Portland State University. From there, she went to Berklee College of Music where, as her bio said, “the pieces all came together and doors started opening.” There, she became the youngest instructor at age 20.

Since then, Esperanza Spalding has won a Grammy and has recently put out a new album, Radio Music Society that is brought her more media attention than previous albums. A quotation from Esperanza Spalding, about her success since winning a Grammy from her website, sums up her charming and witty personality in a few words, “The main way in which the Grammy has changed my life is that I keep getting asked how the Grammy has changed my life.”