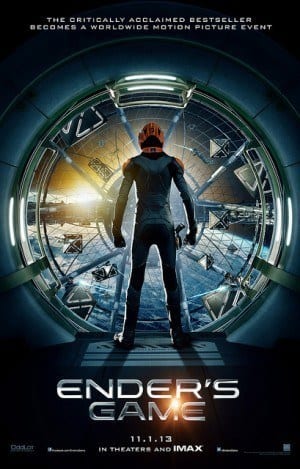 Comic-Con usually brings attention to what the next big thing in Hollywood is going to be. What used to be a convention for sci-fi/fantasy nerds has transformed into the biggest entertainment event of the year. Anyone who’s anyone in the film, television, comic book industries makes an appearance.

But this year, Comic-Con was marred by controversy. And it brought a very interesting topic to the forefront of the entertainment industry.

Since its first trailer was released in May, Ender’s Game has been surrounded by issues. The movie is an adaptation of Orson Scott Card’s 1985 book. Card is known as one of the foremost science fiction writers of today. But his popularity has been rapidly declining since he became a firm supporter of the anti-gay movement.

Geeks Out, a website for geeky entertainment, has been promoting a boycott of the movie. They believe that the sci-fi community needs to take a stance against Card’s intolerant views.

I’ve read Ender’s Game multiple times. It’s one of my favorite books, and one of the best sci-fi books I’ve ever read. And the one thing that I’ve taken away from it (and the rest of the series) is that we need to be tolerant of everyone.

If you haven’t read the book, you should before you pass judgment on Card. I don’t agree with anything he’s said. I’m a proponent of gay marriage, but that doesn’t mean I’m going to stop reading his books. Sure, if Card were to start putting anti-gay messages in his writing, I would stop reading them. Until then, I don’t see a reason to throw away this sci-fi classic.

And as for boycotting the movie, I am definitely going to go see it. I was originally very on the fence about it. Ender’s Game is a tough book to transfer to the silver screen. But the cast and crew of the movie have been very vocal about their opposition to Card’s views.

Director Gavin Hood is a member of Courage Campaign, a group supporting gay marriage. He did admit to being distressed by Card’s views, but it did not change his willingness to make the movie.

“[T]he book is not about that issue,” the Ender’s Game director said. “So I hope people can still appreciate the book because I think he wrote a great book, and the themes and ideas in the book, I think, are universal and timeless and applicable, and I hope the book will still be appreciated as a great work of art, even though I don’t agree with the author. I optioned the book, not an author, and I love what the author said in that book.”

That’s the crux of the issue. Should Ender’s Game be appreciated on its own as a work of art? Or do we factor in the artist when evaluating it?

That, of course, is an individual decision. I have to say though, that condemning Card for being intolerant makes us just as intolerant as he is. As free people, we are allowed to believe whatever we want. We claim to be better by calling for universal equality. But we’re not if we try to force our beliefs on others.

Card can be anti-gay if he wants. I don’t agree with him. You don’t have to either. You don’t have to like Card as a person. That is your right. And it’s your right to boycott the Ender’s Game movie if you want to. I will go see it, because Ender’s Game is a pure piece of science fiction brilliance, something that is not often found nowadays, and should be appreciated for what it is, not for who wrote it.