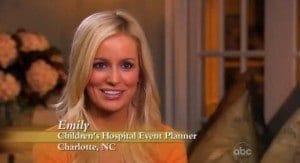 Emily Maynard is getting another shot at love.

Entertainment Weekly reports that Maynard will be handing out the roses on the new season of “The Bachelorette.” Maynard made her reality TV debut as a love interest for Brad Womack during his second stint on “The Bachelor.”

Reportedly, production for “The Bachelorette” will move to Maynard’s home state of North Carolina so that Maynard can be near her daughter, Ricki. As Weekly reports, Ricki’s father, Ricky Hendrick, was killed in a plane crash in 2004, right before the then 18-year-old Maynard learned she was pregnant.

What is your take on this upcoming season of “The Bachelorette?” Do you want to tune in to see Maynard find love? Let us know in the comments below!