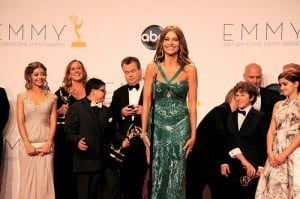 Ellen DeGeneres decided to dress up as Sofia Vergara, fellow CoverGirl spokeswoman, for Wednesday’s Halloween episode of The Ellen DeGeneres Show. The 54-year-old comedian came out on stage wearing the glamorous, teal dress Vergara wore to the Emmy’s.

Vergara’s Emmy dress was famously remembered for its beauty, but more so because of the wardrobe malfunction the Modern Family star encountered at the Emmy’s. The Zuhair Murad dress split down the backside of the dress, leaving Vergara with a sizeable opening. She happily tweeted about the incident 20 minutes before Modern Family grabbed another award saying, “I luv my life!!!!”

Of course Ellen included the famous backside split in her Halloween imitation dress. In Ellen’s hilarious impersonation of Vergara, she attempted to speak in a thick accent saying, “Muchas gracias everybody, muchas gracias, hola! My name is Sofia Vergara. I am easy breezy beautiful CoverGirl from Colombia. Happy Halloween. As you can see, I put my pumpkins out.”

Ellen went on to poke fun at the star saying, “I like being Sofia Vergara, but it’s hard being this beautiful. I’m so busy with CoverGirl and Diet Pepsi and Burger King and my clothing line, the award-winning Modern Family…I get so much work with this fake accent. People think it’s real but…”

Sofia Vergara then walked out, surprising Ellen as she was in the middle of her impersonation. Looking at Ellen’s costume, Vergara pointed out, “Your ass looks huge…Ellen.” The two continued to joke before Vergara taught Ellen a few phrases in Spanish before exclaiming “Let’s go dancing!”