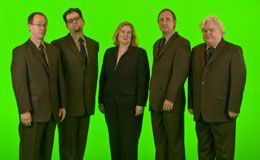 “The Alien Factor” showcases Cinematic Titanic at its best: Performing in front of an live audience.

Now in its third full year, the movie-mocking supergroup Cinematic Titanic has come a long way since its inception in December 2007.

The group features many of the stars and writers of the cult TV show “Mystery Science Theater 3000”, which followed the trials of a bejumpsuited Midwesterner who found himself stranded in space, thanks to some mad scientists, then forced to watch some of the worst movies ever made.

Although the cast changed over the series’ ten-year run, the basic premise remained. The television audience watching at home found themselves in the theater with our hero and his wisecracking robot pals as they riffed and joked their way through some hilariously bad celluloid stinkers.

Now, more than ten years after the series’ cancellation, most of the cast and writers have continued the art and comedy form they pioneered, with Cinematic Titanic, boasting five MST3K alum. Included in Cinematic Titanic is the original MST3K cast, consisting of series creator Joel Hodgson, Trace Beaulieu, and J. Elvis Weinstein, as well as Frank Conniff and Mary Jo Pehl, actors who joined the show later on in the show’s run.

What began as a primarily DVD driven venture has grown into a traveling live performance experience, and their ninth and latest release, The Alien Factor, captures their growth as performers.

The Alien Factor is Cinematic Titanic’s second foray into the world of live performance releases, and this installment, like the previous East Meets Watts, presents the movie for viewers in a unconventional way. Rather than simply seeing the performers’ silhouettes, or just the back of their heads, the Titans (that’s what they’re called) face the viewer and frame the screen without obscuring it.

This unique set up allows the viewer to see the performers and their expressions, making it truer to a live show experience than in the comedians’ past work. Although the live DVDs stray from the silhouetted look of the studio releases, they capture the energy, chemistry, and spontaneity that makes their work so funny — even when working with cinematic scat like The Alien Factor.

Speaking of which: The Alien Factor is a 1970s sci-fi flick that follows the story of a small town in Maryland whose citizens are being terrorized and killed by mysterious alien creatures — one of whom wears, as the Titans points out, “mom jeans.”

Filled with poor lighting, laughable costumes, and acting that ranges from over-the-top to “barely there,” the movie on its own is sure to make you chuckle. But when placed in the capable hands of the Titans, it becomes even more entertaining. And the riffing never stops, even when the action onscreen simply becomes a woman haphazardly wandering through the forest.

Often times, the Titans are at their best when the movies they use simply come to a screeching halt. This was the case during the days of MST3K and it holds true now. All of the Titans shine in this DVD, and watching them crack up at one another’s lines and deliveries illustrates why, after so many years, they continue to get together and poke fun at some of the goofiest films ever made.