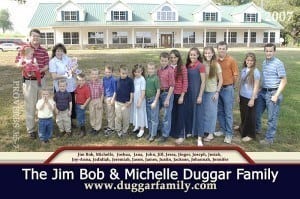 Michelle Duggar enlightens us all with some very intriguing facts.

The Duggars became famous for having 17, then 18 and finally 19 kids (and counting).

Now the Duggars are making headlines again, but this time no one is pregnant.

Michelle Duggar, mother of 19 Duggars ranging in ages from 2 to 24, believes overpopulation is an outright lie.

“The idea of overpopulation is not accurate,” Michelle Duggar told the Christian Broadcasting Network recently.

She said the entire population of the world could fit inside of Jacksonville, FL. Insert any number of valid arguments to the contrary here.

“I agree with Mother Teresa when she said, ‘to say that there are too many children is like saying there are too any flowers,’” Michelle Duggar said.

The Duggars recently experienced the miscarriage of what would have been their 20th child.

The Duggars buy used cars and clothing to help curb their environmental impact. Still, with the number of public appearances the family of 21 makes, it is difficult to argue that their carbon footprint is anything less than above average.

Recently, the Duggars travelled to Chicago to encourage Christians to vote for Rick Santorum. They shuttled around the city making appearances at churches on both the North and South sides and even travelled over to a nearby county.

On a family road trip, the Duggars had to have a bus for the family, and another for clothing and supplies. Michelle Duggar may be able to get away with an unfounded argument that overpopulation is a lie, but there’s no doubt that a family of 21 is leaving a dinosaur-sized footprint on the environment.

According to Michelle Duggar – who has apparently never seen a two-room hut that serves as home to a family of 13 – other countries whose death rates are higher than birth rates want Americans to have more children.

So, there you have it. They are environmentally conscious, and they’re not worried about the world their grandchildren will inhabit. If only the rest of us were as enlightened as the Duggars.