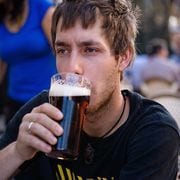 Researchers are finding that a little bit might actually help in maintaining our health.  This research’s recent development will be presented to the Alzheimer’s Association conference today in Vienna, Austria.

This theory confirmed results found in past research that middle-aged people who drink in moderation are at a lesser risk of developing dementia, according to Medical College of Wisconsin’s neurology professor Piero Antuono.

Results were found after researchers studied 3,069 people over the age of 75 for six years.

What is drinking in moderation?  Researchers classified it as eight to 14 drinks a week.  People who followed the controlled drinking rule were put at a 37% less higher risk for dementia than those who banned alcohol completely.

In the study, the type of liquor consumed by participants did not effect the results.

Scientists did find that for people suffering from a condition called mild cognitive impairment, which is developed before Alzheimer’s, drinking alcohol actually accelerated their dementia.

Meaning, after the disease has begun, benefits from drinking alcohol will not enough to decrease the process. Most people diagnosed with mild cognitive impairment were twice as likely to develop Alzheimer’s after drinking 14 alcoholic drinks a week.

While this study along with others have shown benefits from moderate alcohol consumption, they are not able to determine whether the health benefits come from the actual alcohol or a person’s lifestyle associated with drinking.

Alcohol has been found to raise good cholesterol (HDL) and help stop blood platelets from getting stuck together, both of which are common factors leading to dementia.  Studies on animals have also shown that low alcohol consumption stimulates a brain chemical that is used for memory.

On the other side, many research studies suggest any drinking of alcohol at all leads to brain shrinkage!

It seems that no matter what, moderation is the key word.  The benefits in drinking in moderation might outweigh the risks says William Thies, a science officer with the Alzheimer’s Association.  He goes on to say risks tend to be higher with non-drinkers and heavy drinkers than with those who drink in moderation.

So, which is it?  Is moderate alcohol consumption good or bad for you?  Unfortunately, no one theory has been able to prove for certain which is correct.  Either way, benefits or consequences have been found.

Personally, I’m taking it to mean don’t go out and drink thinking it will end all chances of developing dementia.  But drinking moderately might help prevent it.  At least you can hope it is benefiting your health while you’re sipping an alcoholic drink.