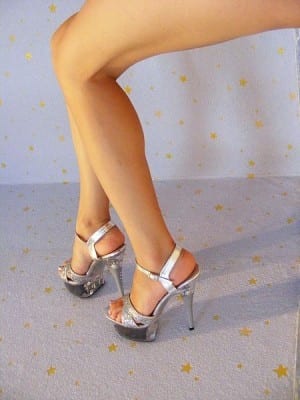 Doug Hutchison, age 51, is counting down the days until his teenage bride finally turns 18.

The rest of the country is right there with Doug Hutchison. It will be a welcome relief when Courtney Stodden turns 18 because maybe then reading her tweets won’t feel like committing a felony. Not to mention her provocative pictures in sky-high clear platform heels—yes, completely see-through—that make it impossible to believe she’s only 17.

And because this couple doesn’t do anything traditionally, Courtney Stodden and Doug Hutchison have begun the teen wife’s birthday celebration a whopping 100+ days in advance. Despite the fact that their reality show plans fell through, Courtney Stodden and Doug Hutchison have taken matters into their own hands and developed a YouTube show called Courtney’s Countdown, to countdown the days until she turns 18.

In the first video, cleverly titled My Foot Hurts, poor Courtney Stodden has a pain in her foot. Despite the pain, Courtney Stodden doesn’t ditch the Lucite. She hobbles around telling anyone who will listen that her foot hurts. She takes a short break to talk to her mom about what she wants to wear for an upcoming photo shoot, “a really tight, tiny dress, like always,” of course.

Doug Hutchison offers some valuable advice, suggesting that maybe it’s the shoes that are causing her pain. The young model insists that she injured herself during a recent “Easter-themed” photo shoot, in which she dressed up like a wannabe Playboy bunny.

If you were one of the fans waiting with bated breath for the Doug Hutchison and Courtney Stodden reality show to air, perhaps Courtney’s Countdown will help heal your wounded heart.