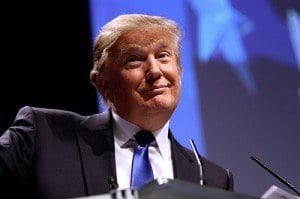 Donald Trump is saying his announcement will be a game changer

Donald Trump is preparing to make an announcement about President Obama tomorrow which has the potential to change the minds of voters before Election Day. Trump posted on Twitter last week telling his followers he had an announcement about the president. He also told Fox and Friends “It’s going to be announced probably on Wednesday. I have something very, very big concerning the President of the United States.” When asked if it was regarding personal issues or business, he replied “It’s all in one, everything. It’s very big. Bigger than anybody would know.”

Michael Cohen, EVP and Special Counsel to Donald Trump commented on his announcement saying “Unfortunately, I am not at liberty to disclose the nature of Mr. Trump’s announcement. Without question it will be big.”

However, many are skeptical of the Celebrity Apprentice star and what his announcement could possibly contain. Maybe it’s his carpet-like toupee or his pumpkin colored skin, but many aren’t taking him seriously.

Trump previously attempted to run for Oval Office but was not successful for obvious reasons. As much as the U.S. desperately needs a president who has experience with bankruptcy and goes through wives like Michael Phelps goes through Olympic medals, it’s probably not in the near future.

David Letterman joked saying “The White House is saying Donald Trump has ‘zero percent chance’ of being elected. Isn’t that a little high?” Although Trump wasn’t successful in the world of politics, he is certainly succeeding in getting back into the headlines.