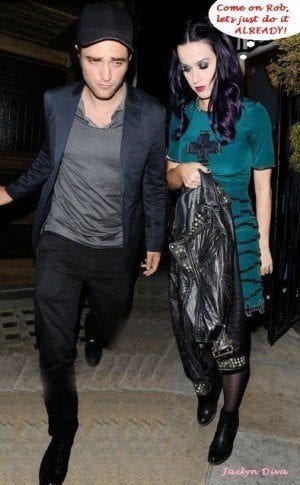 Perry and Pattinson: Awww…they both start with “P”!

All right, so there’s no official confirmation that they’re dating, but after they crashed the wedding rehearsal for some total strangers in California over the weekend (oh nostalgia, reminds me of my ex) what do you think?

Well, it seems like a perfect match. I mean, Perry was married to Russell Brand, so it doesn’t appear looks are that important. (Voice too! Jesus Christ, that kind of tolerance deserves a Grammy all it’s own). And Katy Perry’s just fuckin’ hot, so maybe we outta take away Rob’s “faggot” epithet.

Or not, because it’s just too much fun: like the meme that has the picture of Nosferatu on one side (check Wikipedia, you fuckin’ kids) with the subtitle “Vampire” and Edward on the other with the subtitle “Faggot.” That was on my desktop for weeks.

Anyway, back to our skewered subjects. Apparently, Perry and Pattinson didn’t do anything to draw attention to themselves. They just sat in the courtyard of the San Ysidro Ranch Hotel in Montecito, Calif. watching the ceremony, dressed very casually. Perry reportedly had on a hoodie and big sunglasses. (Holy shit! Are there pictures? Let me know which Target bargain bins I can buy my own at!)

So moving on, this brings about some fun speculation. Like, does anyone wonder if his dick is ice-cold, just like a real vampire’s? If that’s what turns Katy on, I shoulda looked her up a long time ago. (They make dildos for that shit too…but my god, how fast would THAT kill the mood?) As for Pattinson, I’m sure he’s happy to be around someone who doesn’t have the permanent “Who Farted? Look” (ie Kristin Stewart) on her face. And it’s likely another plus to be around someone who’s at least somewhat talented…you know, even if she has no Grammy nominations yet, but there’s still time for Perry, maybe…

So congratulations Katy! You have a real shot at stealing most of your fans’ “Teenage Dream.”