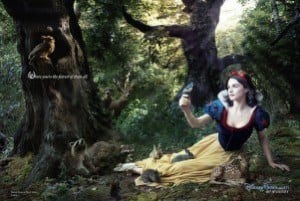 Disney Dream Portraits is photographer extraordinaire Annie Leibovitz’s magical project, that partners with Disney to capture big name celebrities posing as classic Disney characters in stunning and vivid detail.  A masterpiece in costume and set design, editing and vision, Disney Dream Portraits is a wild depiction of a storybook land as we’ve never imagined it before.

Leibovitz first partnered up with Disney back in 2011, and her choice of celebrities in that shoot was appropriate both in looks and temperament.  In the past, Russell Brand has posed as Captain Hook, Jennifer Lopez and Marc Anthony as Jasmine and Aladdin, and David Beckham as Prince Charming.  My personal favorite—Michael Phelps as a merman in The Little Mermaid.

Her latest series, starring Taylor Swift as Rapunzel, among other favorite stars is set to be released in Vanity Fair, InStyle and People.  The whole Dream shoot is titled “Where a world of adventure awaits.”  Pictures of the shoot are already sweeping the internet, and behind the scenes pictures and videos of the shoot provide entertainment and insight all on their own—just don’t let your little ones catch you breaking down the magic!

Disney itself uses the images for Disney World and Disney Land advertisements in magazines and billboards.  In this writer’s opinion, when viewed from an up-to-date web platform, online viewing is the most optimal as it allows for the greatest resolution.  And when it comes to Disney and Leibovitz, you don’t want to skimp.  So load it up and throw it on your projector for a fun night with the kids or reminiscing with your friends.