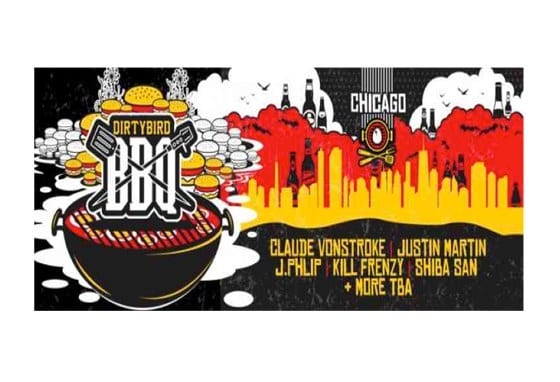 Get Down, Get Dirty

With a lot of turn over happening in the music industry 10 years is a long time for an independent label to survive, let alone thrive. DIRTYBIRD has celebrated its 10-year anniversary this past January. An idea, which was started in a San Francisco bedroom by founder, CLAUDE VONSTROKE, proved to be one of North America’s most conclusive labels.

Using a smooth blend of techno and house, passed through a hip-hop crunkifier and influenced from drum ‘n’ bass & funk, DIRTYBIRD has created their own sound. Starting with impromptu parties in San Francisco to headlining major festivals DIRTYBIRD has established a name and a family. This family is all about sharing core group values, having fun with close friends over a beer and enjoying good music.

This summer they took their renowned BBQ tour across to new cities such as Seattle, Portland, Chicago, and Denver. Last weekend I had the opportunity to attend their BBQ in Chicago. The first 750 fans received free BBQ cooked to you by the grill master, GRILLSON. SHIBA SAN opened followed by KILL FRENZY, JPHLIP, CLAUDE VONSTROKE, and finally closed out by the iconic hip-hop producer DJ PREMIER.

Everything about this event was worthwhile. I amongst other fans was fully satisfied about the turnout of the event; gates were packed to get in throughout the day as the bass heavy music was blaring across Chicago, the filet mignon sandwiches and burgers were delicious followed by a cold beer to quench your thirst. Next time this event is in your city get down and get dirty.