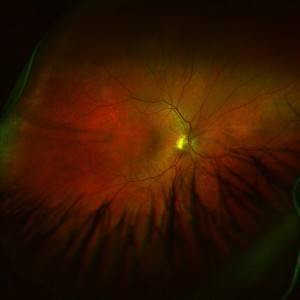 Diabetic macular edema affects as many as half a million Americans

Diabetic macular edema is a degenerative eye disease affecting the macula, the center of the retina, causing damage to this part of the eye and eventually severe loss of vision and blindness. Now, the FDA has announced its approval of the drug, the first of its kind, Lucentis for treatment of diabetic macular edema.

Diabetic macular edema can cause damage to blood vessels in the eye. The swelling of the macula affects the retina in what is called diabetic retinopathy, the most common diabetic eye disease. Damaged blood vessels can leak fluid and blood, which causes swelling and blurred vision, possibly resulting in severe loss of vision and blindness. The macula is the area of the eye associated with sharp central vision. People with damage to this part of the eye lose central vision, but not peripheral vision. They can’t see faces, for example.

The FDA announced to the press Friday its approval of Genentech’s drug Lucentis (ranibizumab injection) for the treatment of diabetic macular edema. The FDA noted that the drug is for use with “good diabetic sugar control” and is designed to be given once a month as an injection into the eye by a qualified health care professional.

The drug is already approved in the U.S. for the treatment of neovascular age-related macular degeneration (AMD) and macular edema following retinal vein occlusion (RVO).

Two studies were conducted that tested the safety and effectiveness of the drug as a treatment for diabetic macular edema. Together, the studies RIDE and RISE treated and followed 759 patients for three years. The patients were randomly divided into three groups: one group of 250 patients received a 0.3 mg dose, another group of 252 were given a 0.5 mg dose, and the control group of 257 received a fake drug for the first 24 months.

The patients underwent an eye test at month 24 where they had to read letters arranged on a vision test-chart line by line.

The results showed that the group who received the 0.3 mg dose of Lucentis demonstrated significant improvements in vision compared to the control group. The group given 0.5 mg doses of the drug did not show such improvement.

The most significant improvements from the trials, according to Catharine Paddock PhD in her article for Medical News Today titled Diabetic Macular Edema Drug Wins FDA Approval, include:

·      Patients that received Lucentis at the 0.3 mg dose demonstrated an average vision improvement of more than two lines (10 letters). In the RIDE study, 10.9 letters for the drug group versus 2.3 letters for the control group. In the RISE study, 12.5 letters compared to 2.6 letters, respectively.

·      After the first treatment, significant gain in average vision was noted after just seven days.

·      Patients receiving the 0.3 mg dose were significantly more likely to maintain their vision. Within the studies, this was defined as losing fewer than 15 letters on the vision chart. In the RIDE study, this was 98% of the drug group versus 92% of the control group. The RISE study showed similar improvement, 98% versus 90% respectively.

·      Improvements in vision measured at 24 months in the drug group were maintained through to 36 months with continued treatment.

Common side effects reported in patients treated with Lucentis included bleeding of the conjunctiva, increased pressure inside the eye, eye pain and “floaters.”

According to the U.S. Centers for Disease Control and Prevention, 26 million Americans live with diabetes type 1 or type 2. Diabetes is seen as the main cause for blindness among those 24 to 74.

According to the National Health and Nutrition Examination Survey (NHANES) from 2005-2008, more than 4.2 million Americans 40 or older have diabetic retinopathy. A subsequent study revealed that over half a million Americans suffer from diabetic macular edema.

According to Renata Albrecht, director of the Division of Transplant and Ophthalmology Products in the FDA’s Center for Drug Evaluation and Research, “Diabetes is a major public health issue in our country, and all patients with diabetes are at risk of developing diabetic macular edema. Today’s approval represents a major development for the treatment of people whose vision is impaired by DME as a complication of their disease.”

In a statement to the press, clinical trial investigator and Retinal Specialist at The Methodist Hospital in Houston, Texas, David M. Brown said of the FDA’s decision, “This approval is an important advancement in the fight against blindness for people with diabetes.”

Brown added, “Now that it will be available, Lucentis therapy can begin to make a difference in the lives of our patients with DME.”