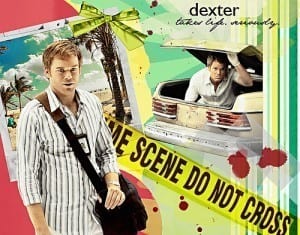 I wrote it while you watched it!

Dexter Recap begins…NOW! So we left off last week with Deb trying to off ol’ Dex (and herself) by running the two of them off of the road and into the water. She then went on to save him after she herself she was saved by a bystander.

Dexter’s latest episode opens with a family therapy of sorts with Deb and Dexter under the care of Dr. Vogel. I like the idea of brother/sister therapy for these two.

Oo Vogel is listening to “Make your own kind of music,” a song by Barry Mann and Cynthia Weil featured recently (and awesomely) on Lost. And BAM! She gets kidnapped by former patient A.J. Yates! Luckily Deb needs some shrinky shrink time so she stops by to find the doc gone, and then goes to recruit Dexter. They reconcile at a crime scene, who needs Vogel’s therapy anyway?

Speaking of Vogel, she’s playing the Stockholm card right now with her captor.

Potential sergeant tension between Quinn and lady cop whose name I can’t recall!

Masuka is bonding with his new daughter; aaaaand yep! It looks like she’s squeezing him for money.

Dexter pumps Angel for info on Yates, because the blood spatter guy gets that kind of inside info from the lead Lieutenant.

Deputy Matthews is telling Quinn to get off of the current murder case because he’s friends with the suspected killer’s family; I feel like this show just throws arbitrary characters in the role of dirty cop whenever the plot dictates the need for a dirty cop. Sigh.

Masuka is hiring Deb, Private Eye, to look into his daughter’s past. Deb likes finding out family secrets.

Dexter comes home to find Jamie, Quinn and neighbor Cassie. I smell set up! Why is Jamie the most clueless babysitter ever in regards to what her employer does? She is pretty much raises Harrison… Leave it to Dexter to drop out of a dinner party with a lame-o excuse though.

BTW I kind of like Deb and Dexter working a case together, it’s nice.

Vogel is trying to play some psychiatry voodoo on Yates by playing the role of his mother; it seems to be working…almost. Vogel dials Dexter from Yates’ phone, which is totally unbelievable because no one remembers people’s numbers anymore!

And in a twisted moment of irony, Yates (who as a child hid under the bed from his abusive mother) is lying in wait for Dexter under the bed. But of course Dexter sees through this and just straight up impales him through the mattress. I dunno, that must’ve taken a lot of force. I’m just saying…

And now Dexter, Deb and Vogel: brother, sister and mother, are on the boat dumping the body together. The only thing missing is little Harrison to truly make it a family affair.

Next week: follow up on Zach Hamilton, the killer-boy. Vogel wants to teach him Harry’s code, eh? Oh and Boondock Saints guy totally needlessly defends Deb’s honor when a dude flirts with her. Poor Boondock Saints guy. Uh oh, Quinn sees Dexter sneaking around on a kill and says “I know what you’re doing.” I bet you my life’s savings that he does not in fact know what Dexter is doing. (It’s quite the life’s savings, mind you.)