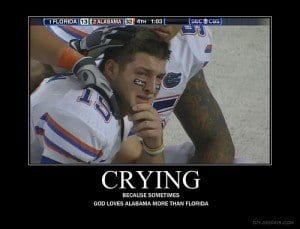 Is Tim Tebow the girl crying in the limo?

Peyton Manning decides to go to the Denver Broncos, and all  other pieces can now fall in place for the NFL.

The Denver Broncos were amongst a few teams Peyton Manning was considering; amongst those were the Tennessee Titans. Titans owner Bud Adams confirmed to The Tennessean that Peyton was off to the Denver Broncos. “He called me himself and told me he wasn’t coming, that he made his mind up to go with Denver.”

According to The Denver Post Manning’s deal is one of the big ones. The 36-year-old just signed a contract that could be worth up to $90 million over the next five seasons.

Peyton Manning was out last season with a neck injury, but the Denver Broncos are taking a chance with the star quarterback, hoping he is back in full health for the kickoff of next season.

This acquisition pushes out the popular, knee bending current quarterback Tim Tebow. Tebow, who had a winning season with the team, was assumed to be the first string quarterback in the upcoming 2012 season, but it would seem that now the Denver Broncos are all set to trade the popular media spectacle.

Tebow has an uncanny ability to run the football and lead his team, but his passing percentage limped along last season, ending at 46.5%. This is one area Peyton Manning does not have a problem with, sitting at almost 65% for his career.

Manning was the number one draft pick to the Indianapolis Colts and brought the franchise a Super Bowl championship in 2007. After 14-years, he will hopefully be healthy enough to play with the Denver Broncos next season.