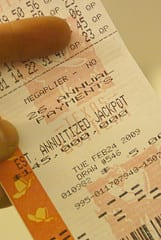 After three days of silence, a winner has finally claimed the jackpot

That changed Monday, when a New Jersey man claimed his $338 million prize—the fourth largest Powerball in history–at the same store where he bought the fateful lottery ticket.

Pedro Quezada, 44, validated his winning ticket Monday at 4:30 p.m. at Eagle Liquors in Passaic, New Jersey. If he accepts the lump sum payment he will collect $221 million total or $152 million after taxes. He doesn’t speak English, but told reporters in Spanish that he was “very happy” and says he will use the money to help out his family.

“I’m going to help a lot of people, whatever they need,” said Quezada, according to the New York Daily News.

The Daily News reported that Quezada was ecstatic when he found out he won the Powerball and immediately called his wife to tell her the news.

“I still can’t believe it,” his wife, Ines Sanchez, told the Bergen Record. “We never expected it but thank God.”

In the end, it was the neighbors who were much more talkative than the winner—and, according to them, the money couldn’t have gone to a more deserving person.

“They deserve it because they are hardworking people,” Eladia Vazquez, who lives across the street from Quezada, told the Associated Press.

“He sometimes would work from six in the morning to 11 at night, so I did not see him much,” said Jose Gonzalez, another neighbor who talked to the Associated Press. “I am happy for him. … I don’t know where he is now but I imagine he will drop by to say hi to his friends.”

NorthJersey.com reports that Quezada has five children and has owned a local deli, the Apple Deli and Grocery, since 2006.