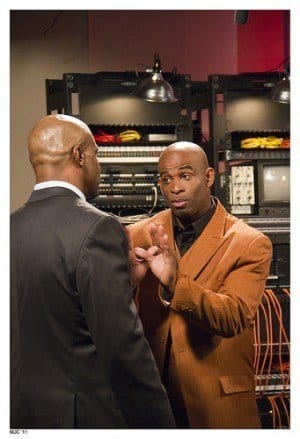 Wife is suing Sanders and his daughter for $200 million

Deion Sanders had previously put a gag order on his divorce case, but has recently been dealing with a civil suit, filed last week by his soon-to-be-ex-wife, that has become public.  The suit is not part of the gag order and now Deion Sanders must defend himself as well as his daughter, Deiondra Sanders, against his wife’s ridiculous $200 million suit.

The wife of Deion Sanders, Pilar Sanders, is seeking $200 million in compensation for “severe amounts of emotional and physical abuse … [that] led to mental suffering and public humiliation,” according to IBTimes.com.  According to the suit, Deiondra posted comments about Pilar on her Twitter about her being “the number one gold digger of the year” alongside other undesirable comments.  Pilar states that Deion Sanders also Tweeted that he was “tired of all [Pilar’s] lies and foolishness,” thus endorsing his daughter’s comments.  Pilar also filed a separate suit in response to “an alleged assault at the couple’s home last month by the athlete’s aunt, Laura Jones.  Jones is named in the suit along with Deion Sanders, who, according to the suit, encouraged the assault,” said the Dallas News.

According to reports, Deion Sanders appeared on ESPN Dallas 103.3 FM to discuss the issues.  “There’s a way to do things and a way not to do things,” Deion Sanders said, “I don’t use the media as a platform to fight my battles.  You know, I speak up for myself.  But God fights my battles, and I’m fine.”  When hosts from The Ben and Skin show asked how his wife and her attorney came up with the figure, Deion Sanders said, “You wouldn’t be talking about it if it wasn’t such an absurd number.”

Although his wife’s newest suits are taken up a bit of Deion Sanders’ time, he hasn’t lost focus from his work.  He is a co-founder of charter schools in Dallas and Forth Worth, Prime Prep Academy, and it is reported that open enrollment began this week.  Deion Sanders was recorded as saying, “I’m so happy, man.  I cannot wait to walk the halls of these schools.”  He is also hoping to feed 100,000 kids this summer through a program he founded, Feed me Prime.